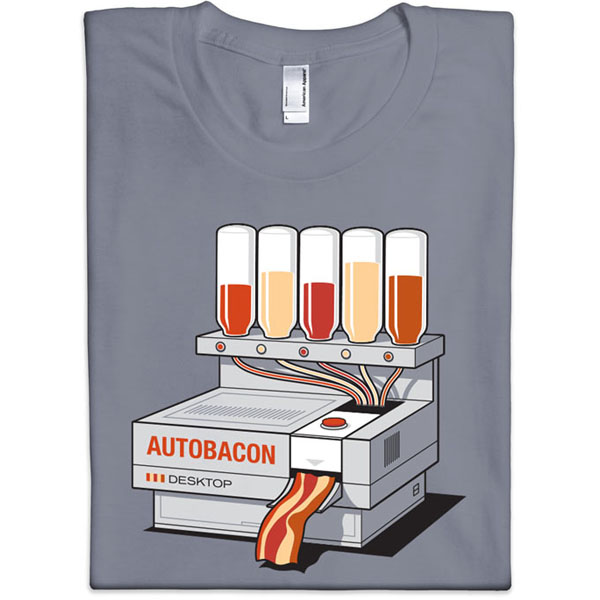 Now, depending on the quality of the ink that you buy, I don’t know if you want to eat this bacon…but, feed it to your family and friends?  For sure. 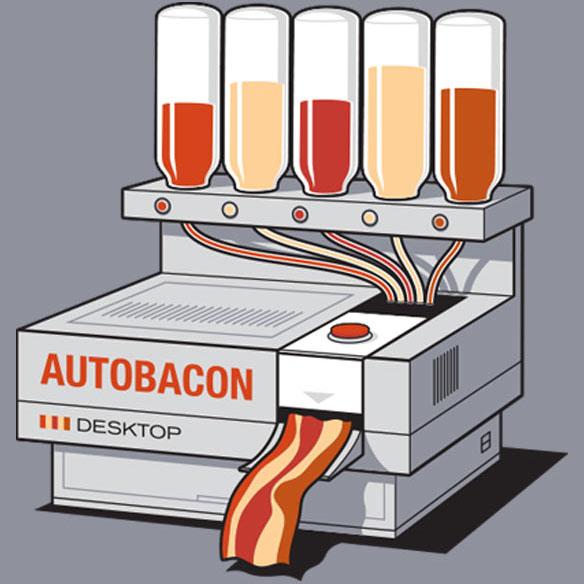 Imagine if a bacon maker actually existed. You keep it on your desk in your office and just push a button for a piece of bacon whenever you got hungry. Now, imagine having a bacon maker machine at home. Kids get hungry, just send them to the bacon maker, so you can continue watching TV, playing games, or creating more such fabulous machines! Life would be great! Don’t you think?

Unfortunately, the Autobacon is nothing more than a cool t-shirt – it will probably never become a reality. But, with today’s technology, you never know.  I would like to see Apple stop making the screens on their devices bigger and start working on a machine that abiotically synthesizes organic molecules which are turned into bacon.

If you want to pick up this geeky t-shirt for $24 from ThinkGeek, go right ahead.  If you don’t, I’d suggest you check out the Bacon Jam and the Torani Bacon Syrup, which tastes a lot better than it sounds.  (Actually, though.  I’ve tried it.)

The power of bacon helps us overcome many obstacles, but one you may not have realized is that bacon gives us the strength to efficiently open envelopes. Introducing the handcrafted Bacon Letter Opener. Ergonomically curved for a comfy fit in the hand, the bacon letter opener […]