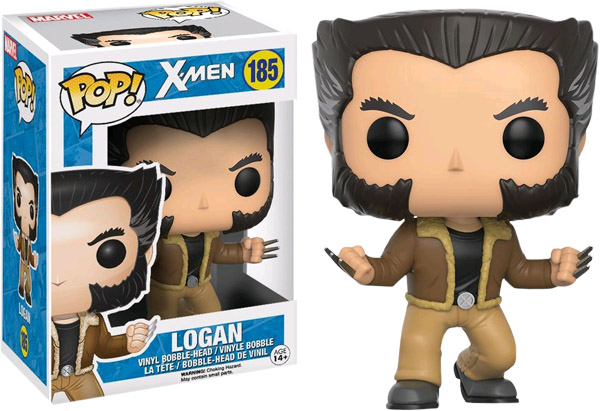 The adamantium claws are out with the X-Men Logan Pop! Vinyl Figure.

Standing 3 3/4-inches tall, the X-Man known as Wolverine is dressed in rugged casual wear with his lethal claws extended, ready to take on the bad guys as only he can. While the Funko figure isn’t based on the upcoming movie, Logan, the gray in his hair indicates that this version of Wolverine has been around for a while.

The X-Men Logan Pop! Vinyl Figure will be available January 2017 but it can be pre-ordered now for $10.99 at Entertainment Earth.

You know a person is tough when he still manages to look intimidating as a Pop! vinyl character, and the Marvel Universe Pop! Logan Vinyl Bobble-Head doesn’t take any of the macho away from the claw-popping mutant. There will be a lot of jealous guys […]

Get your mutant-loving, movie-watching binge on with X-Men: The Adamantium Collection (Limited Collector’s Edition) and see if you can manage to pull out a Blu-ray disc without going ‘Snikt.’ The claws are out with this awesome package, featuring everyone’s favorite cigar-chomping mutant (or at least […]

Logan Into the Sunset T-Shirt

Wolverine and X-23 get the ending they deserve on the Logan Into the Sunset T-Shirt. Okay, the movie Logan ended the way it needed to, the only way it really could have since Hugh Jackman said he was hanging up his adamantium claws… but isn’t […]