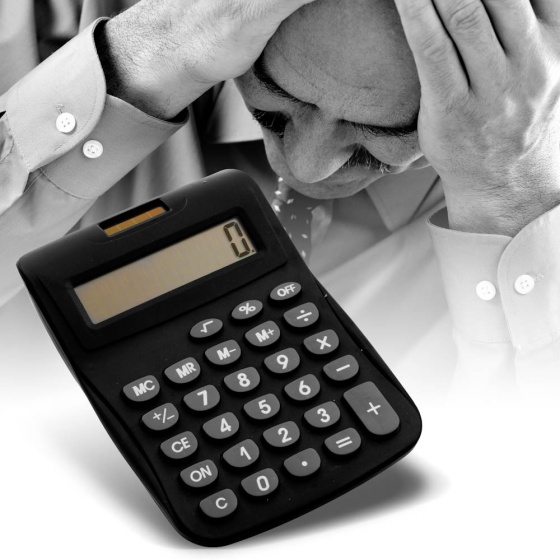 Got some beef with some folks over at the Finance department? Have a grudge against a co-worker who just won’t stop filching your pens and markers from your table when you’re not looking? Then it’s time for some pranking and sweet revenge with the Wrongulator.

This is a calculator with an erroneous twist. Expect the Wrongulator to churn out incorrect answers and perform bogus calculations with the user being none the wiser and watch in the background as your begrudged enemies stare at their reports and spreadsheets in frustration. Don’t go to far with the prank though, because we don’t want anyone to lose their jobs now. But that’ll teach people at the office a lesson when it comes to messing with you.

Just be prepared for their retaliation.

No one really likes to be told how much the bill is, how far under target, or by how much you have overspent! So if your job has a lot to do with maths, then we hate to be the ones that break it to you, but you’re probably not the favourite person in the office.

The Wrongulator is no ordinary calculator, its actually the world’s worst calculator as it never gives the right answer, ever!  If your calculator has been exchanged for this one then every single calculation you’ve entered in it has been wrong. It is perhaps the cruelest practical joke you could inflict on your office colleague and the chances are, without being told, they’ll probably never guess….well not before it’s too late anyway!

The Wrongulator is available from Red5 for £4.95.

When you’re number crunching with a calculator, trying to figure out what the damage is after splurging on a big vacation to Disney or after purchasing too many gizmos seen on GeekAlerts, it’s usually no laughing matter. That’s why some wise guy has invented a calculator […]

Instead of going for yet another one of those attempts of putting a calculator inside a computer mouse, like Ezkey, Sanwa, and others have tried, the Japanse company Takumi decided to try something different by designing a calculator like a keypad.

The photo of the Old-School Calculator iPhone 4 Case looks so real that I had to do a double-take at the product information to check that there isn’t a real calculator stuck onto the case itself. Of course, common sense would tell you that there isn’t […]

Crunching numbers need not be boring, especially if you’ve got the Brick Calculator around. Most people already know what LEGO building blocks are. Just imagine a gigantic piece of LEGO that’s been equipped with a calculator, and that’s basically what you have here in your […]

The Shake-u-lator Calculator ($20) doesn’t require any batteries to operate. Simply give it a quick shake and you’re set to do your algebra. (Update: Link removed because the website closed down.) This 8 digit display calculator uses Faraday’s Principle of Electromagnetic Energy to operate. You […]

If you chanced upon the App Calculator in a store that sold iPads, then you might think that someone’s pulling one over you or that you’re getting a really good deal. Sadly, while the calculator comes in the shape of an iPad and looks like […]

Maybe you have read about the Water Powered Clock. Now someone has taken the same kind of technology and put it inside a calculator. Never be without batteries again. Our scientifically engineered calculator is ingeniously powered by water. Just pour the water into the […]

Remember that pink calculator hub from a couple of months ago? This new white model will give you a bunch of bonus features, such as a 12/24 hour world clock with alarm, a calendar and a thermometer.