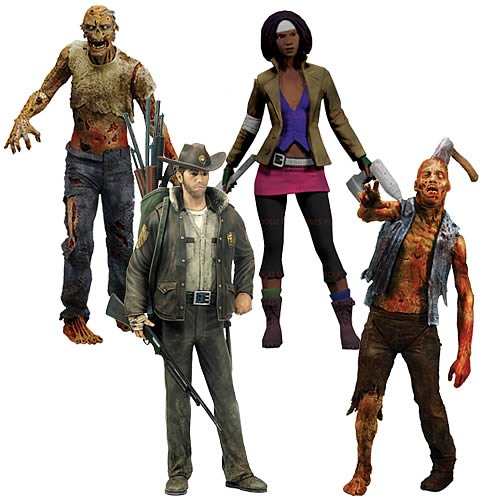 The zombie apocalypse has arrived with The Walking Dead Series 1 Action Figure Set that includes two of the favorite characters from the hit comic book series and two undead ‘walkers’ that are determined to spread the zombie virus and chow down on some fresh brains.

Whether your fan of the comics or the hit AMC series, you’ll have a blast with the action figures that let you stage your very own war against zombies. While the four individually packaged figures in the Series 1 collection are subject to change, you’re sure to have hours of gory fun and you can be confident that your own brain will get to stay safe and secure in your skull.

No fight for survival would be complete without Officer Rick Grimes and Michonne, and they’re prepared to stomp some zombie butt in a serious way. Rick Grimes comes complete with his trademark cowboy hat and jacket, and he even has his duffel bag filled with removable shotguns for those times when a little extra firepower is needed.

Michonne, who does just fine without the heavy artillery thank you very much, comes equipped with her katana sword, a power drill, hammer, pliers, and a spoon. Both action figures feature approximately 22 points of articulation.

On the undead side of things, you have Zombie Lurker, with a torso that splits apart at the waist so all the gooey intestines and other organs are exposed, transforming this ‘walker’ into a ‘crawler.’ The Lurker also has removable arm segments and a head that splits at the jaw line.

The Zombie Roamer has a head that splits open when you press the lever on his back that releases blood and brain fragments. He comes with a removable axe and has removable arm segments, too.

Don’t risk your life by picking fights with real zombies. Play it safe with The Walking Dead Series 1 Action Figure Set for $54.99 from EntertainmentEarth.com.