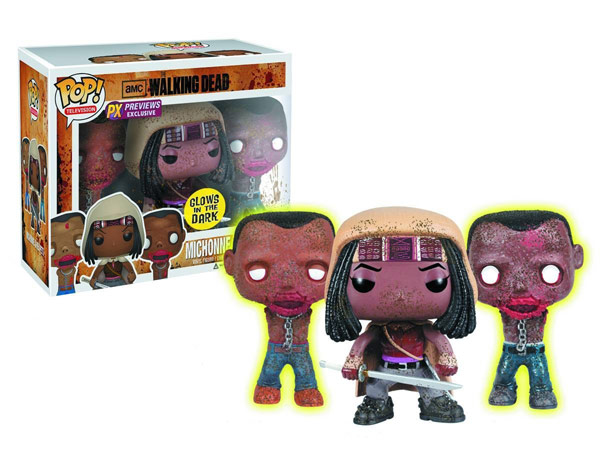 Zombies aren’t very cute and cuddly, and Michonne doesn’t exactly bring out warm and fuzzy feelings either, but the Walking Dead Michonne & Glow-In-Dark Pet Zombies Pop! Vinyl Figures will make you go ‘Awwww, how cute,’ unless you’re staggering around with no heartbeat and an unquenchable hunger for living flesh.

The 3 3/4-inch vinyl figures provide a Funko Pop! look at one of the more popular characters in The Walking Dead, along with her two zombie ‘pets’ that do double-duty as pack mules and zombie deterrent.

All 3 figures feature glow-in-the-dark highlights, offering a nice reminder every time you open your eyes during the dark of night that a zombie apocalypse could happen at any time.

The Walking Dead Michonne & Glow-In-Dark Pet Zombies Pop! Vinyl Figures will be available June 2013 but they can be pre-ordered now for $24.99 at Entertainment Earth and $26.99 at Amazon.com.