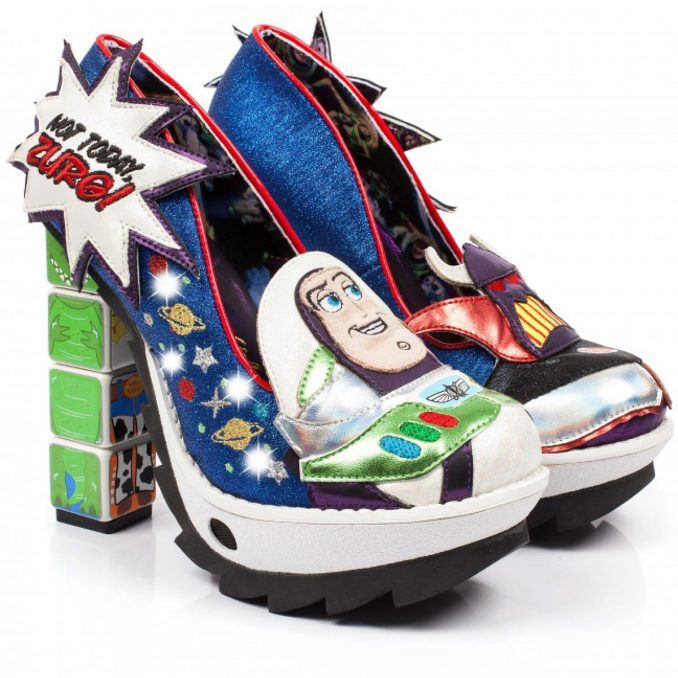 These Toy Story Arch Enemies Light-Up Heels may look pretty crazy, but if you take a look at some of the other shoes made by the same company, Irregular Choice, they fit right in. They’re the company behind other incredible shoe designs like the Star Wars Lightsaber Heels, Unicorn Sneakers, and Star Wars Shoes. They may not be what you want to wear every day, but for those special occasions, it doesn’t get much more unique than this.

Just looking at all the details in the picture of these Irregular Choice Toy Story Arch Enemies Heels only tells you part of the story. Sure, you see that the left shoe features Zurg and the right shoe features Buzz Lightyear, but a mere picture can’t show all that these shoes do. That’s because the heels, which have blocks with pictures of Sheriff Woody, Rex, Jessie, and Buzz Lightyear, rotate so you can mix and match their body parts. Plus, the shoes have bright LEDs that light up when you walk. To top it off, they actually have laser and cosmic sound effects that you can operate via a button.

The terrifying tyrant, Emperor Zurg is unstoppable in his quest to destroy his enemy, Buzz Lightyear. These fun high heals bring the two arch enemies together in an intergalactic battle on your feet. Featuring an applique character upper with galaxy embroidery on a glittering fabric backing, rotating block Toy Story character heels, motion sensitive LED lights and an audio feature with laser and cosmic sounds.

Buzz I Am Your Father Toy Story T-Shirt

Looking for a Father’s Day gift? This Buzz I Am Your Father Toy Story T-Shirt may be the perfect gift for the “evil” step-father that can take a joke. This shirt features a picture of Emperor Zurg, along with the quote “BUZZ, I AM YOUR […]

Spice up your food to infinity and beyond with these cute Toy Story Buzz Lightyear and Woody Salt and Pepper Shakers. No Toy Story movie would be any good without them, just like your meals are no good without some seasoning. Let this pair season […]

Buzz Lightyear is in trouble. He needs an operation quickly and only you can help in the Toy Story 3 Operation game.

These Spiked Zombie Heels might look intimidating at first, but you’d probably agree that they’re a whole lot tamer once you’ve had a look at the Vintage Steampunk Heels with Remote Control LED Lights. These shoes might not have remote-controlled LED lights, but it more than […]

Take your shoe collection to the next level with these Star Wars Luke Skywalker Lightsaber Lace Up Heels. Take a walk on the light side. The heels look like lightsabers and light up. They also play sounds from Star Wars. They will be the coolest […]