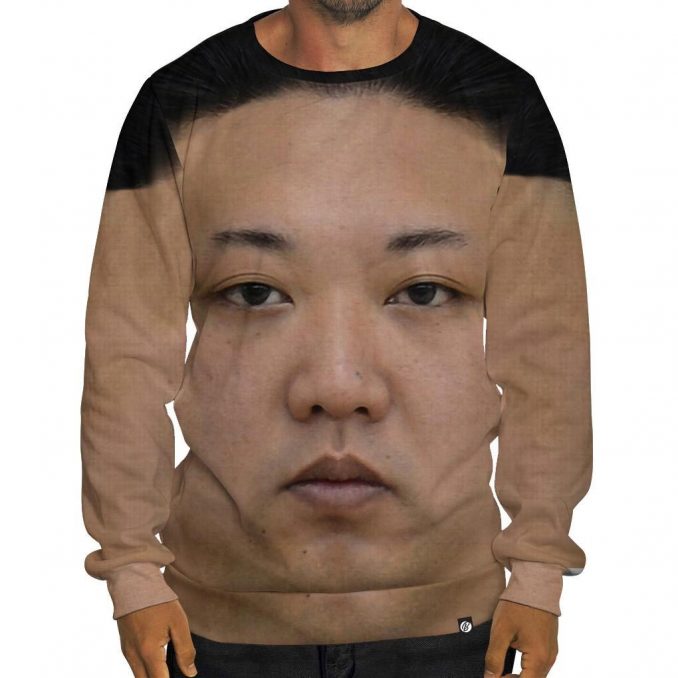 If you like attention, nothing will turn heads better than this Kim Jong Un Sweatshirt. Long considered a villain to most of the world and his own people, Kim Jong Un may be turning a new leaf. He has the opportunity to dismantle his nuclear weapons and missile programs and to bring peace and prosperity to his people.

Whether he becomes a hero or remains a thorn in America’s (and Trump’s) backside, this Kim Jong Un Sweatshirt is a way to attract attention, meet new people, and start conversations. It features a surprisingly life-like, high-resolution print of North Korea’s leader on both the front and back.

This shirt is from Beloved Shirts, who had cut and sew all their shirts in Huntington Beach, California. Yep, this shirt isn’t made in a sweatshop in North Korea where all the profits go to the Dear Leader, it’s made by highly skilled America craftsmen right in the USA.

Buy the Kim Jong Un Sweatshirt for $59.95 at Beloved Shirts. If you like this, check out the Kim Jong-un and Trump Pencil Erasers.

When Mother Nature goes wonky, mankind can face extinction from giant lizards, giant turtles, and even giant moths. However, the Catzilla Sweatshirt reveals the greatest threat to our continued survival – giant cats… that shoot laser-beams from their eyes. The pullover sweatshirt features an all-over […]

It’s not quite a complete week without having Hello Kitty gracing the pages of GeekAlerts. Today, she will get you in a crafty mood with her Hello Kitty Sew Cute Sewing Machine. Manufactured by Janome, a reputable Japanese company, the machine will inspire you to make […]

An iconic scene gets a Whovian twist on the Doctor Who Abbey Road Crewneck Sweatshirt, as The Beatles clear the scene to make way for a quartet of familiar villains. Even people who couldn’t tell you the names of any of The Beatles probably recognize […]

GeekAlerts loves cool hoodies and we’ve shown you quite a few of them: Wonder Woman, Batman, Star Wars, and Marvel Superheroes.  Now we got something for all you BBC Doctor Who fans.  Show your love for The Doctor and stay warm this winter with the […]

Prepare to dazzle everyone with the force of the Star Wars Sweatshirt as Darth Vader tries to grab a piece of the ‘ugly Christmas sweater’ pie. Some shirts we wear to impress; others we wear to burn the eyes of any who look upon it. […]

Remember the Star Wars comic books from the 80s? They are back on one awesome shirt. This Star Wars Comic Hoth Ringer Sweatshirt is overflowing with all of your favorite characters from the original trilogy. There is Boba Fett, C-3PO, Chewbacca, Darth Vader, Han Solo, […]