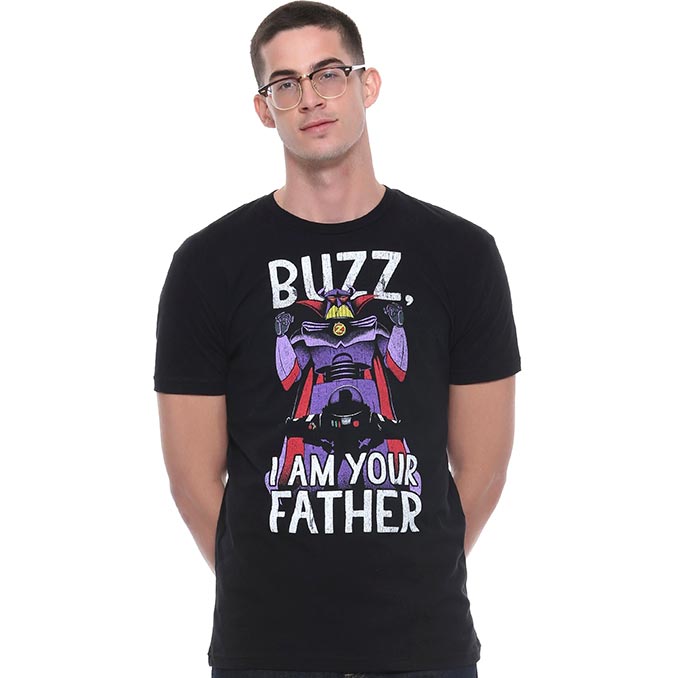 Looking for a Father’s Day gift? This Buzz I Am Your Father Toy Story T-Shirt may be the perfect gift for the “evil” step-father that can take a joke. This shirt features a picture of Emperor Zurg, along with the quote “BUZZ, I AM YOUR FATHER,” which was the line in Toy Story 2 that was a parody of the famous line from The Empire Strikes Back.

An unforgettable moment in an iconic trilogy – when Evil Emperor Zurg reveals he is Buzz Lightyear’s father. What did you think we were talking about? This black tee features that heart stopping moment from Toy Story 2.

Spice up your food to infinity and beyond with these cute Toy Story Buzz Lightyear and Woody Salt and Pepper Shakers. No Toy Story movie would be any good without them, just like your meals are no good without some seasoning. Let this pair season […]

Have you ever felt that you have more friends than you can handle? Not a problem anymore. This Buzz Lightyear Prestige Costume ($83) is guaranteed to effectively reduce your circle of friends. You don’t even have to wear it, just tell your your friends that […]

Buzz Lightyear is in trouble. He needs an operation quickly and only you can help in the Toy Story 3 Operation game.

The Toy Story Canvas & Leather Print Tote Bag is a stylish large tote with two interior pockets. The shoulder straps are adjustable. It comes with a Woody and Alien keychain. You may have noticed that it is covered in cute line drawings of your […]