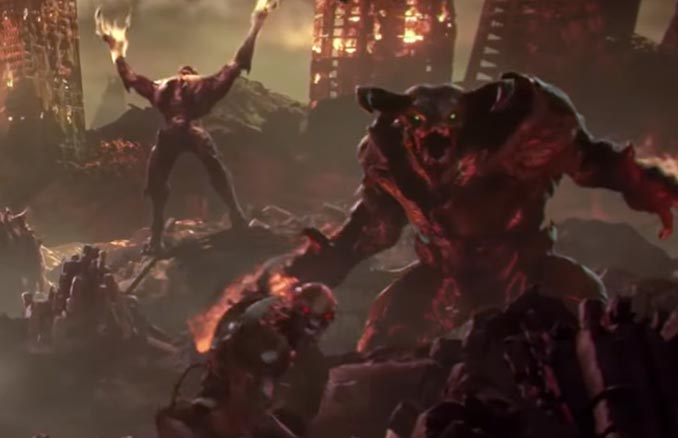 Watch the DOOM Eternal – Official E3 Teaser Trailer for a taste of the upcoming sequel to the award-winning and best-selling DOOM (2016). Announced at the 2018 Bethesda E3 Showcase, DOOM Eternal promises the ultimate combination of speed and power and the next technological leap forward for first-person combat.

“For the past two years it’s been so inspiring to hear you talk about what you’d like to see next – and I gotta tell you, we’re right there with you,” said Creative Director Hugo Martin during the BE3 Showcase. “You want the DOOM Slayer to feel even more powerful? We’ve got it. You want even more badass demons? There are twice as many in this game. You want to see Hell on Earth? We just teased it. But what we’re most excited about is showing you some of the things that you might not be expecting.”

Announcing DOOM Eternal, the direct sequel to the award-winning and best-selling DOOM (2016). Developed by id Software, DOOM Eternal brings the ultimate combination of speed and power with the next leap in push-forward, first-person combat.

As the DOOM Slayer, return to take your vengeance against the forces of Hell. Set to an all-new pulse pounding soundtrack composed by Mick Gordon, fight across dimensions as you slay new and classic demons with powerful new weapons and abilities.

Witness the worldwide unveiling of DOOM Eternal gameplay at QuakeCon 2018 in Dallas, Texas on August 10th! The reveal will be live for attendees and livestreamed for everyone.

Remember how cool Tom Cruise was in “Minority Report” when he was manipulating computer data on a life-sized clear screen with his bare hands? Well, we may be approaching a similar plane of awesomeness once we adopt The Leap, which is itching to replace and outshine […]

Give your monitor some personality with this Doctor Who Yellow Eternal Dalek Monitor Mate Bobble Head. It will brighten up whatever area you display it in. The Daleks are one of the Doctor’s most dangerous enemies and now you can have one of your very […]

Touchscreens are just now becoming the popular thing but the idea of actually having to touch a screen is already becoming outdated because of the Leap Motion Controller. When it comes to computers, there’s a lot of touching involved. You have to put your hands […]

Earth’s strongest hero meets the Kryptonian juggernaut of destruction on the Superman Day of Doom Men’s T-Shirt. It was the moment that shocked even jaded comic books fans as Superman literally gave everything he had to take Doomsday down. Of course, comic books being what […]