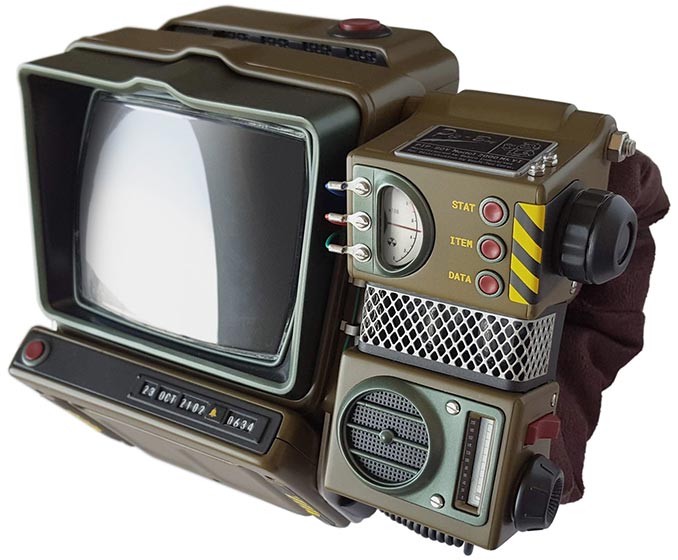 This amazing Fallout 76 Pip-Boy 2000 Mk V Construction Kit comes with over 150 precision parts, all the Vault-Tec tools needed to assemble it, and an impressive vegan leather case. Put it together and you have your own full-size detailed wearable replica of the Pip-Boy 2000 Mark VI featured in Fallout 76.

Details abound and it is wearable, so it is phenomenal for both display and cosplay. Although there is no electronic functonality, the knobs actually turn, the spring loaded buttons press like real buttons, and the radoi dial works. Even the holotape player opens to eject the holotape. Building is sometimes half the fun, but here it only should take an hour or two, so it is more like 5% of the fun.

The Wand Company’s Pip-Boy construction kit is a beautifully designed, highly detailed and fully accurate replica of the Fallout 76 Pip-Boy 2000 Mk VI. Presented in an authentically vintage display case, the kit has been designed to mimic the look and feel of the kits that Vault-Tec™ may have supplied to vault dwellers to help them understand the value and mechanical workings of the all-important Pip-Boy technology. Keep and display the kit in its presentation case, or assemble over 100 components to create this highly accurate collectible.

Using the Vault-Tec tools provided, and following the fully illustrated instructions, you will see how easy it is to combine fabric, moulded and cast parts, metal bolts, grilles, screws and cables to create one of the most important pieces of Vault-Tec equipment. Take care and learn well; your survival just might depend upon it.

The Pip-Boy: Deluxe Bluetooth Edition is your very own functioning Pip-Boy replica that pairs up with your Bluetooth phone or tablet. This deluxe version comes with a RobCo Industries stand that doubles as a charging base and speaker. You’ve earned this accessory thanks to all […]

The Fallout 4 Pip-Boy Messenger Bag looks like a Pip-Boy. It features a padded adjustable shoulder strap with buckle closure and a laptop sleeve that holds up to a 17″ laptop. Do you have the stats to carry this bag when full? Get it and […]

This Fallout Pip Boy Molded Mug looks just like every vault dweller’s favorite accessory. It holds for 48 oz. of liquid, which will keep your stats up if you are travelling the wasteland. It makes an excellent gift for fans of the hit video game […]

The Fallout Fat Man Vault Boy Snow Globe should be a part of your holiday decor. Vault Boy is depicted here giving you the thumbs up from within a mini nuke. Celebrate winter while Vault Boy celebrates nuclear winter within this snow globe. Fallout Fat […]

If you liked the Fallout 76 Pip-Boy 2000, wait until you get a load of this Fallout Plasma Pistol Replica. Like the Pip-Boy, this Fallout plasma pistol is full-size and extremely detailed, making it ideal for cosplay and display. It even has LED lights on […]