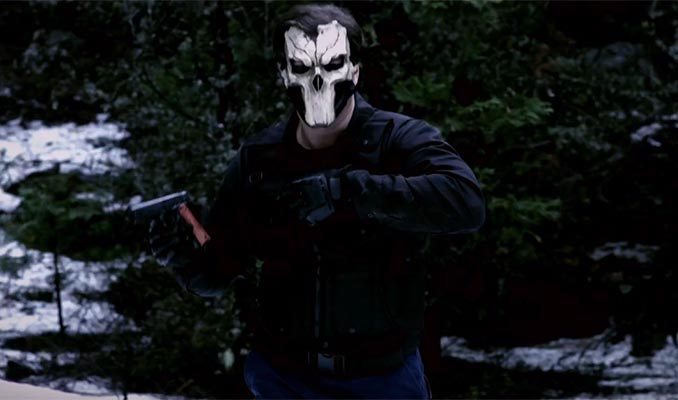 When you watch The Punished Official Trailer, you won’t confuse it with a big budget release from Marvel. Although the name is similar to The Punisher, and there are similarities in the character in both looks and background, this is a low budget action movie. However, low budget doesn’t necessarily mean low quality, and The Punished looks like it will be brimming with raw action and intense shoot outs.

No word on when it will be released, or if it will be direct to video.

Watch the The Punished Official Trailer from Wild Eye Releasing:

Wolfgang, a professional mercenary for hire is thrust in the middle of a local dispute when hired by a wealthy benefactor. But when he develops a friendship with a young orphan and a local tour guide, he is torn between his loyalty to violence for money, and righting wrongs in the name of innocents.

The bad guys will be careful around you when you wear the Punished T-Shirt… or they’ll shoot first so you don’t get a chance to take aim at them. Not too many people want to be Frank Castle. The poor guy had to deal with […]

The Maps of Tolkien’s Middle-Earth

Need some maps of Middle Earth for the wall of your Hobbit home? Look no further than The Maps of Tolkien’s Middle-Earth. You get four beautiful maps of Middle-earth, and an 80 page hardcover book with more info and details of all the places you’ll […]

Get ready to add a shot of Venom to your Batman collectibles with the Bane Mercenary Version Statue. Standing 34.5-inches tall, Bane is one of eight assassins contracted by Black Mask to kill Batman in the Arkham Origins video game. While similar to his comic […]

Today, Sony Pictures released the VENOM – Official Trailer #2, and it looks incredible. It’s been over 3 months since the release of the Original Venom Trailer, but it was well worth the wait, as this trailer is quite long and includes a lot of […]