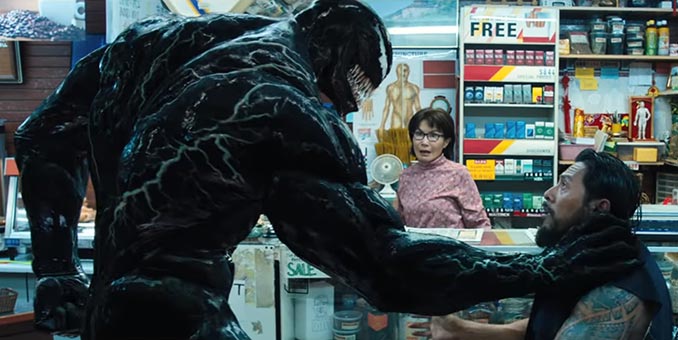 Today, Sony Pictures released the VENOM – Official Trailer #2, and it looks incredible. It’s been over 3 months since the release of the Original Venom Trailer, but it was well worth the wait, as this trailer is quite long and includes a lot of new footage. While the first trailer was also long, it mainly was focused on just the origin story. This one features many more action scenes including a snippet of the confrontation with the main villain.

Venom is coming to theaters on October 5, 2018. It features Tom Hardy as Eddie Brock / Venom, and also stars, Michelle Williams, Riz Ahmed, Woody Harrelson, Scott Haze, and Reid Scott. It is directed by Ruben Fleischer, best known for Zombieland and 30 Minutes or Less.

One of Marvel’s most enigmatic, complex and badass characters comes to the big screen, starring Academy Award® nominated actor Tom Hardy as the lethal protector Venom.

The new Venom Movie with Tom Hardy will be coming out in November. Related merchandise, like this awesome Venom Sinister Smile T-Shirt, will be a hot commodity. Officially licensed from Marvel, this Venom t-shirt features a big, toothy, frightening grin from Venom. His eyes are […]

This Superman Lois Lane Rescue Fleischer Statue is inspired by Fleischer Studio’s animated shorts from the 1940s and captures a tender moment between Superman and Lois Lane. This statue looks awesome. It depicts Superman touching down on a stack of Daily Planet newspapers that feature […]