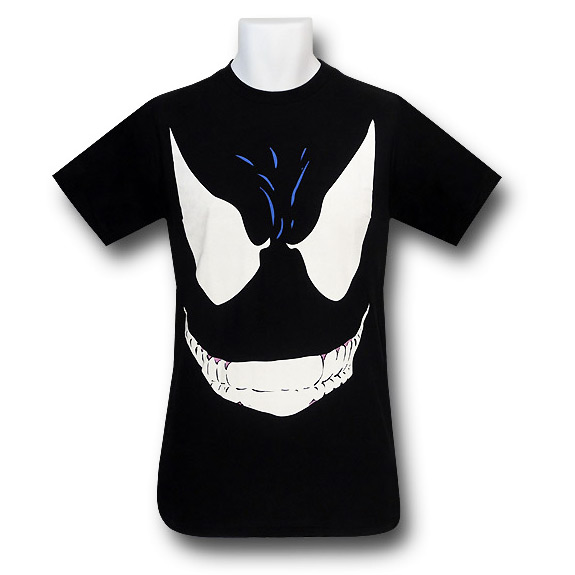 Venom is one of Spider-Man’s archenemies, and also the subject of this really cool Venom Big Grin T-Shirt. The Venom Symbiote is an alien life form that bonds with a host, giving it enhanced powers. Spider-Man was the first known host, but Peter Parker was able to reject the evil Venom Symbiote. The second host was Eddie Brock, who became the supervillain Venom after bonding with the symbiote.

Made from 100% Cotton, this soft, black t-shirt appears as if….as if it may be an alien symbiote. Venom, specifically. Yes, an alien symbiote that’s taken the form of this very t-shirt. A T-Shirt that screams bloody murder when you take it off; that wraps its tendrils around your heart and spine, daring you to attempt separation. DARING YOU! Okay, it’s just Venom’s face rendered in artist Todd McFarlane’s inimitable style. Calm down; the damn thing ain’t gonna’ hurt ya.’

Order the Venom by Todd McFarlane 30 Single T-Shirt for $21.99 at SuperHeroStuff.com.

Trick or treat, give this symbiote something sweet to eat. As the Spider-Man Venom Creature Reacher, you’ll rule the neighborhood as Marvel’s popular anti-hero. You don’t have to worry about getting his monstrous appetite but you’ll have Venom’s look when you put on the over-sized […]