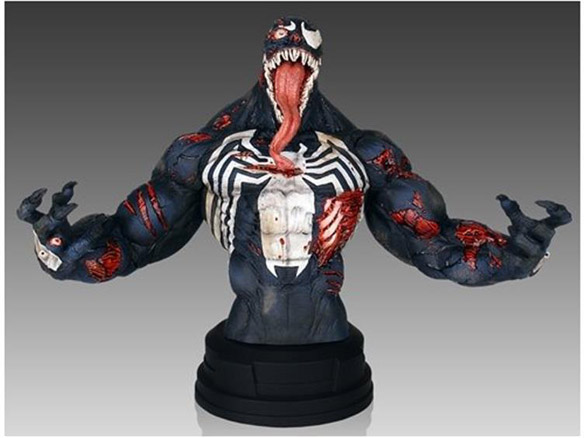 Fans of Marvel Comics and zombies will want to combine their passions with the Marvel Zombies Venom Mini Bust, featuring a detailed look at the animated corpse of the former villain/hero.

The alternate universe that is the home of the Marvel Zombies wasn’t a very kind place to Eddie Brock/Venom. After he succumbed to the zombie plague, his symbiote wanted nothing to do with him. Apparently, it desired a fresher diet than Eddie’s decaying body was able to provide. Because of the weakening bond between host and symbiote, Zombie Spider-Man was able to easily deal with Zombie Venom.

Still, Venom is one of the most beloved characters in the Marvel Universe, and he makes one heck of a creepy-looking zombie.

The Marvel Zombies Venom Mini Bust will be available January 2015 but it can be pre-ordered for $79.99 at Entertainment Earth, and for $71.99 at BigBadToyStore.com.

I don’t really think it’s a good idea to give your child a scare or two with creepy and gross-looking plush toys, although they make for fun gifts for adults who can handle the gore. Much like the Road Kill Toys, these Creepy Cuddlers Series […]

Wilson Fisk has never looked deader than he does as the Marvel Zombies Kingpin Mini-Bust. Most people might view that as an insult but the Kingpin doesn’t mind because he’s a zombie. When the zombie plague invaded the Marvel universe, it struck everyone. The rich, […]

The zombies have found the ultimate weapon – cuteness. When you look at the Creepy Cuddlers Zombies Plush Set Series 2, you might forget that the walking dead are after you for your brain, and nobody could really blame you. This plush series includes Lucky […]

Sometimes not even having absolute control over the power of magnetism is enough, and the X-Men Zombie Magneto Marvel Villains Mini-Bust shows what happens when mutant ability meets undead hunger. The first piece in Gentle Giant’s Marvel Zombie Villains series, this 1:6 scale polystone mini-bust […]