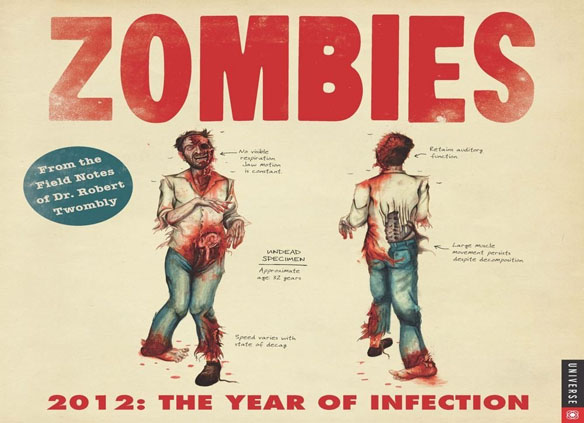 Yeah, we’re several months into 2012 already so you might be asking yourself why I’m showing you a calendar for 2012. Well, the answer is simple; it has zombies and there is no need to worry about 2013 since you’ll never see it anyway.

The Zombies 2012 The Year of Infection Wall Calendar is covered with classic zombie greats like the month of April that shows a zombie’s head chopped off by a shovel and the month of July with a zombie gnawing on someone’s arm…you need to keep those limbs covered! 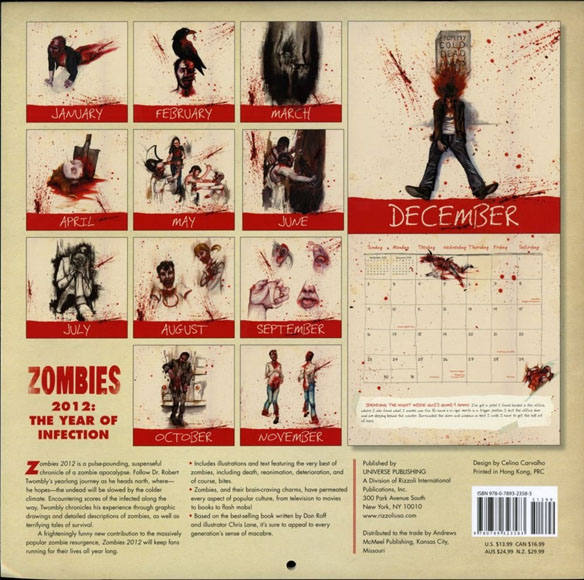 Zombies 2012 The Year of Infection Wall Calendar is a pulse-pounding, suspenseful chronicle of the zombie apocalypse. Follow Dr. Robert Twombly’s yearlong journey as he heads north, where he hopes the undead will be slowed by the colder climate. Encountering scores of the infected along the way, Twombly chronicles his experience through graphic drawings and detailed descriptions of zombies, along with terrifying tales of survival. A frighteningly funny new contribution to the massively popular zombie resurgence, the Zombies Wall Calendar will keep fans running for their lives all year long. Includes illustrations and text featuring the very best of zombie (after) life, including death, reanimation, deterioration, and, of course, bites!

Why not count the days down until the Zombie Apocalypse on your very own Zombies 2012 The Year of Infection Wall Calendar available at Amazon.com from $5.69.

Zombies: The Year of Infection Calendar 2014

This Zombies: The Year of Infection Calendar 2014 is an awesome way to keep track of the date. This 2014 12-month calendar is displayed with excerpts from Dr. Robert Twombly’s field journals. Any fan of the undead will enjoy this calendar and the amazing artwork. […]

If Zombies are your monster of choice, you’ll want to hang this Zombies The Year of Infection 2015 Wall Calendar on your wall. Fans of the undead will enjoy a new image every month. It is displayed like excerpts from Dr. Robert Twombly’s field journals. […]

Even Time Lords need to plan their daily events and what better way to keep track of everything than to write it down on your very own Doctor Who 2012 Wall Calendar. This 2012 calendar is full of great color photos of the eleventh Doctor […]

Infection is the name of a new beautiful watch from the Japanese watch importer Tokyoflash. The timepiece features a unique pulsating three color LED display – once again with the characteristic hard-to-tell-the-time look.