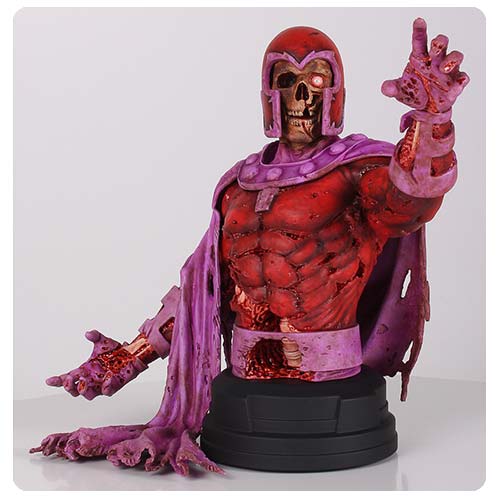 Sometimes not even having absolute control over the power of magnetism is enough, and the X-Men Zombie Magneto Marvel Villains Mini-Bust shows what happens when mutant ability meets undead hunger.

The first piece in Gentle Giant’s Marvel Zombie Villains series, this 1:6 scale polystone mini-bust reveals Magneto in all his undead glory, and the master of magnetism must have put up one heck of a fight because he’s a long way from being pretty. Can you imagine going up against a zombie that can turn anything metal against you? And that helmet makes the necessary headshot almost impossible to achieve.

The hand-painted statue, which consists of a limited edition of 1,500 pieces, is individually numbered and paired with a matching certificate of authenticity.

It won’t be available until April 2014 but the X-Men Zombie Magneto Marvel Villains Mini-Bust can be pre-ordered now for $89.99 at Entertainment Earth.

Why rely just on your magnetic personality to get attention when the X-Men Magneto Simple Dress can also be used to draw all eyes your way? The sometimes villain/sometimes hero/sometimes anti-hero known as Magneto might be the master of magnetism but he also has a […]

The master of magnetism and cool helmets is ready to bring you into his world (as slaves) with the Magneto & the Brotherhood of Mutants Art Print. The sometimes-foe-sometimes-friend of Charles Xavier displays his magnetic personality on this colorful 24″ x 18″ print. Limited to […]

This X-Men Marvel Now Magneto White Costume ArtFX+ 1:10 Scale Statue looks amazing and has some incredible detail. Straight from the pages of Marvel Now and the artwork of Adi Granov, this statue is of Magneto! Here he is wearing his iconic helmet, in his […]