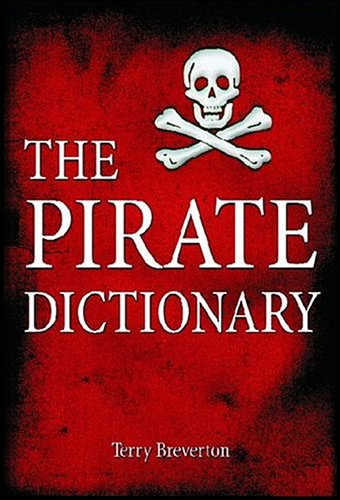 If you didn’t understand people at the office today, you’re not going crazy, you just didn’t know it was International Talk Like A Pirate Day. To get ready for next year, you need The Pirate Dictionary by Terry Breverton. After reading the Pirate Dictionary, you’ll not only understand your friends next September 19, you’ll be able to dominate them in talking like a pirate.

The Pirate Dictionary by Terry Breverton

Reading through these words and phrases is an abbreviated trip through history, with lists of major naval mutinies, a summary of the slave trade, and even jokes. This dictionary is written to be entertaining as well as informative, to give a flavor of the interesting times from the fifteenth to the eighteenth centuries when pirates controlled many sea lanes. It also contains a treasure trove of factual information about life aboard the ship, important pirate haunts, and technical terms.

Order the The Pirate Dictionary from $9.13 from Amazon.com. It is also available at Books A Million, AbeBooks.com, Barnes & Noble, and Buy.com.

Are you the sort of wordsmith who uses a dictionary often? If so, you may want to give this Two Way English Chinese Talking Electronic Dictionary a try. Words make the world go around after all. Maybe you need a quick translation, or a quick […]

It hits everyone at a certain time in the middle of their day, every day. It’s that hour or so when your eyelids feel the heaviest, and you’d give anything just to be able to get a short, comfortable nap, right there on your desk. […]

It pays to take the extra mile nowadays to keep your valuables safe. I mean, you never know when crooks might come thieving in your home or office. Joining the ranks of the Spy Bolt Covert Secret Container, Electrical Outlet Hidden Wall Safe, and the […]