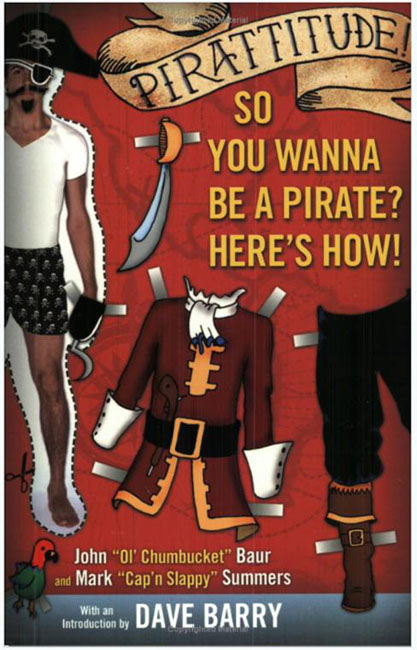 Deep down I think everyone has a soft spot for Jack Sparrow and those cool pirates of yesteryear.  I lot of us dreamed of being pirates and still do.  The big question is, how do you do it?  Well, the Prattitude!: So You Wanna Be A Pirate? Here’s How!  book is ready to get you on your way.  I don’t recommend you go about pillaging and ransacking ships on the high-seas, especially since the United Nations and most countries would then be gunning for you, but you still can indulge yourself in the knowledge and would be pirate skills.  With today being International Talk Like a Pirate Day, and the authors of this book the actual founders of the holiday, I think this book would make a fitting start to all things pirates.  Enjoy September 19th in a pirate fashion that John “Ol’ Chumbucket” Baur and Mark “Cap’n Slappy” Summers would be proud of.

Set sail for high-seas hijinks and nautical nonsense with those paragons of Pirattitude who invented the famous International Talk Like a Pirate Day. Whether readers are old hands at pirating or hopeless landlubbers, the Pirate Guys will have them pirate-savvy in no time with sure-fire pirate pickup lines for any occasion, tips on how to make their pirate party a buccaneer ball that even Martha Stewart would be proud of, and help determining their true pirate monicker.

John “Ol’ Chumbucket” Baur and Mark “Cap’n Slappy” Summers came up with the idea for Talk Like a Pirate Day during an ill-fated game of racquetball way back in 1995, making it the first holiday that ever originated as a sports injury. They adamantly deny that there was any grog-swilling involved, though they both admit to swilling more than their fair share of grog at other times.

You can purchase Pirattitude!: So You Wanna Be a Pirate? Here’s How! at Amazon.com from $6.79.

If you’re looking for attention at the gym, you can grunt intensely as you jerk up weights that are too heavy for you and then drop them with a loud clank. Or–if you’d rather be a little more subtle and make a good impression–you can […]

As usual, the past week has been a busy one here are GeekAlerts with over 100 postings about cool new products. Some of the highlights include the WowWee Roboscooper Robot, LEGO Brick Calendar, Pink Floyd Album Cover Coasters, Click and Grow Computerized Plant Pot, Sizzling […]

Place this Pirate Skull Door Knocker on your front door and neighbors will wonder if you spend your weekends sailing the high seas, looting unsuspecting passerby’s of their booty. Handcrafted by the talented group of artists at Odd Art Fabrications, no two skulls look exactly […]

It’s the pirate life for the Merc with a Mouth as Wade Wilson takes to the high seas on the Deadpool Pirate T-Shirt. Pirate booty probably means something completely different these days with a madman like Deadpool commanding the Jolly Roger, because you know there’s […]