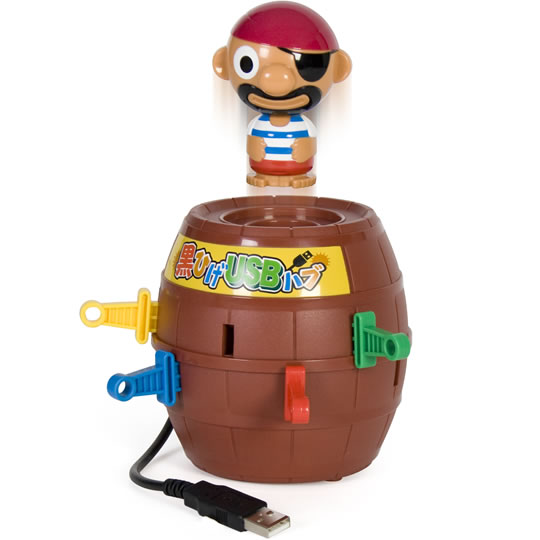 You heard right – finally these two incredible agents of change meet in a blaze of glory: on one side, you’ve got the four-way USB hub, allowing you to control several devices from your computer at once. On the other, you’ve got a miniature version of Pop-Up Pirate, the devilishly tense game of chance and surprise.

Just click a little switch under the pirate’s barrel and pop the miniature marauder into the top. You’ll hear a jolly jingle to tell you that the seadog shenanigans can begin. Each player then takes a coloured cutlass and pokes it into the barrel. When someone finally pokes the pirate in the posterior, he’ll leap in the air like he’s just tasted the cat o’ nine tails!

Each time you play, the position of the triggering cutlass hole changes, so you’ll never know just when the cursed corsair will fly into the rigging – and with four colours of cutlass to share with four other players, it’ll be anyone’s guess who’s next to dish out some harsh naval justice.

Normally when we post a USB hub on GeekAlerts, it is because it has an incredibly unique look like a Skull, Airplane, Car, or Alien. That isn’t the case here. While this 12 Port USB 3.0 Hub has a sleek, compact design that you could […]

If you’re looking for attention at the gym, you can grunt intensely as you jerk up weights that are too heavy for you and then drop them with a loud clank. Or–if you’d rather be a little more subtle and make a good impression–you can […]

At GeekAlerts, we love USB gadgets. From USB Can Coolers and Circus Canons to USB LED Lamps and Heated Slippers, there are tons of cool USB gadgets to own. If you have a lot of these gizmos, you need the MegaHub, a 36 Port Powered […]

Often when we include a USB hub on GeekAlerts, it’s because of the really unique style, such as the ones that look like a Chocolate Bar, Darth Vader, or a Toaster (awesomely complete with toast thumb drives). While the J-Tech Digital SuperSpeed USB 3.0 4-Port Hub […]