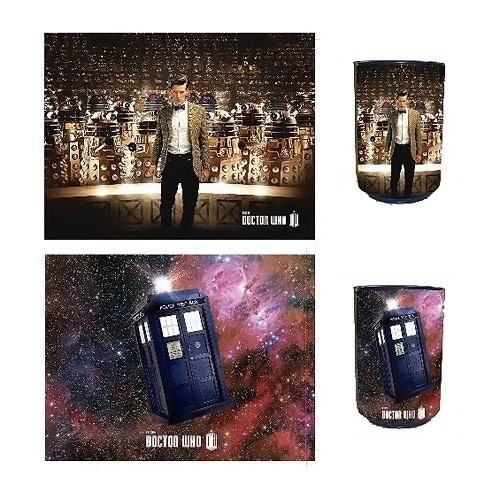 You can get an extra special thrill when you use the Doctor Who TARDIS and Dalek Reversible Talking Trash Bin to get rid of trash because it’s like two trash cans in one, and it even provides its own sound effects.

Choose the Whovian scene that fits your mood. Feel like kicking butt and taking names? The defiant Doctor standing among an endless sea of Daleks will help you tap into that alpha mood. Prefer something a little more serene? Flip the reversible exterior around to display the TARDIS floating in a field of stars.

Get ready to throw just about everything into the trash that will fit because each time something is tossed into the can, a Doctor Who sound effect will be triggered. Sounds include, but are not limited to, the familiar dematerialization of the TARDIS and a Dalek saying either ‘Exterminate’ or ‘You are an enemy of the Daleks. You must be destroyed.’

I don’t know about you but that’s enough to make me throw away stuff that isn’t trash.

The Doctor Who Reversible Tardis & Dalek Trash Bin will be available September 2013, but it can be pre-ordered now for $32.99 at Entertainment Earth or for $33.99 at Urban Collector.

Daleks will talk your ear off if given the chance. They love to verbally let you know how they will exterminate you and wipe out all life everywhere. If you can’t get enough of the Daleks and their tough talk, check out this Doctor Who […]

Fans of Game of Thrones or just fans of medieval history will love this Crusader’s Great Helm Gothic Trash Bin. It matches the Crusader Helm Mug that we showed you the other day. Throw your trash away in medieval style. This replica of a Crusader’s […]