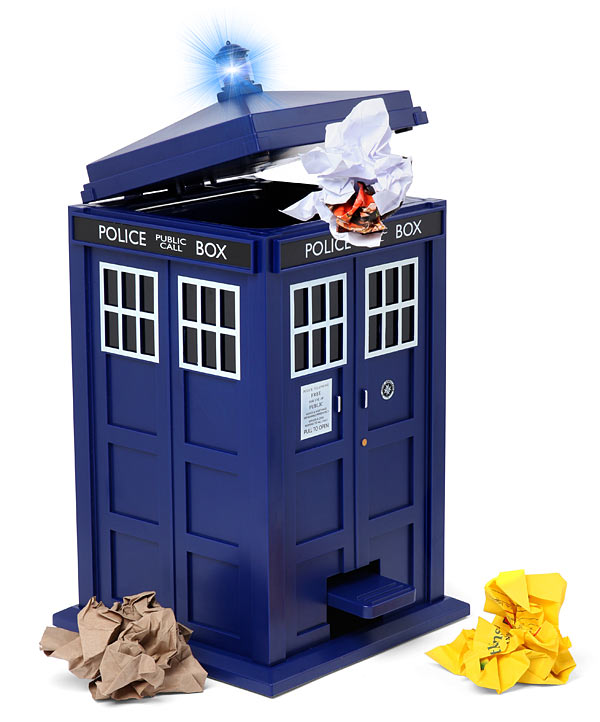 If only trash cans were larger on the inside than the outside, we wouldn’t have to take out the trash as often. Sadly that’s not the case, even with this Doctor Who TARDIS Flip Top Pedal Bin. Toss your trash like a Time-Lord with this awesome Police Box bin.

For the Doctor, tossing out the trash usually involves killing Daleks or Cybermen. For us it’s more mundane. But at least we can do it in style now. This Office-sized Trash Can is modeled on the 11th Doctor’s TARDIS. Just step on the pedal and throw your trash away. 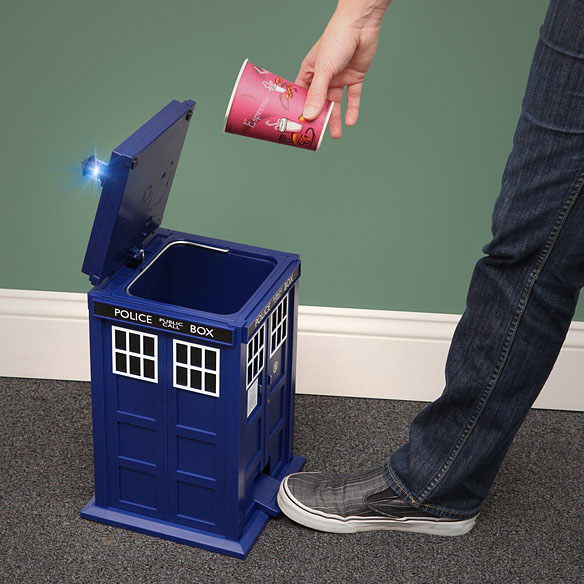 Doctor Who TARDIS Trash Can

UPDATE September 2012: The Doctor Who TARDIS Trash Can is now available at ThinkGeek.com for $89.99.

You can get an extra special thrill when you use the Doctor Who TARDIS and Dalek Reversible Talking Trash Bin to get rid of trash because it’s like two trash cans in one, and it even provides its own sound effects. Choose the Whovian scene […]

Fans of Game of Thrones or just fans of medieval history will love this Crusader’s Great Helm Gothic Trash Bin. It matches the Crusader Helm Mug that we showed you the other day. Throw your trash away in medieval style. This replica of a Crusader’s […]

People have come up with all sorts of ingenious ways to reuse, reduce, and recycle. I’ve seen a lot of Christmas trees, bags, ornaments, and jewelry made from empty soda or beer cans, which I think is a good idea to make further use of […]

GeekAlerts has shown you the Doctor Who Disappearing Mug, but now here is the TARDIS Mug. The Doctor’s time-traveling ride is here to serve your coffee and other drinks in a style the Doctor himself would be proud of. Drink up, because you never know […]

Pedal Pub – The Bike with the Barrel

If you like hanging with your pals and slamming down some brewskies but also enjoy being in the great outdoors and seeing the sights, the Pedal Pub is the bar you’re looking for. Originally designed in the Netherlands to promote a local tavern, this unique […]