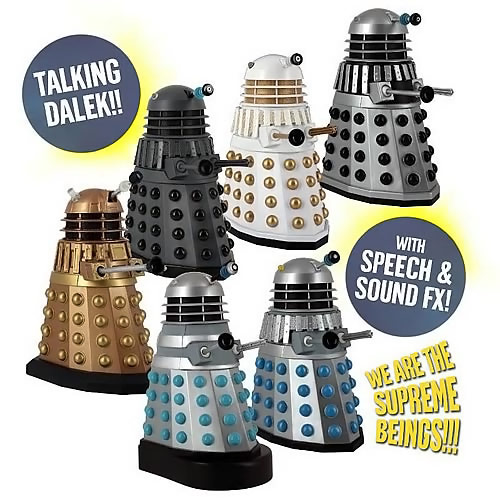 Daleks will talk your ear off if given the chance. They love to verbally let you know how they will exterminate you and wipe out all life everywhere. If you can’t get enough of the Daleks and their tough talk, check out this Doctor Who Talking Dalek 5-Inch Action Figure Set.

This set includes 6 individually packaged Dalek action figures. Each Dalek includes sound FX and speech specific to its own era, so each really is different.

This set is just $179.99 from Entertainment Earth, eBay.com and Amazon.com.

Get ready for an amazing adventure with the Doctor Who Time Zone Playset 1: Dalek Invasion 2075AD. These 3D card diorama playsets feature different time zones visited by the Doctor in the TV series. You can connect them all for larger adventures and the best […]

With the 50th anniversary happening, it is the perfect time for this Doctor Who Doctor and Dalek Sets Wave 1 Pack. Wave 1 gives you 3 different Doctor and Dalek action figure 2-packs. You get a Doctor and a Dalek in each. You can collect […]

Daleks are the Doctor’s most fearsome foe.  Despite the fact that they look like pepper pots and have plungers for arms. So just how does the Emperor Dalek make so many of these villains? We aren’t sure, but you can make your own Dalek army […]

Doctor Who fans who are looking for a good read will want to sit down with The Dalek Handbook. Inside you will find an in-depth look into the Daleks, the Doctor’s most fearsome foe. It is filled with pictures and info from six decades of […]

The Doctor Who Dalek Sec and Assault Dalek Bluetooth Speaker Pack gives you two daleks that are actually speakers. They also play sound clips that include Exterminate, Gun, Reinitializing, Power Down, Good Dalek, and Override! The antennae flash when you play music and the eye […]