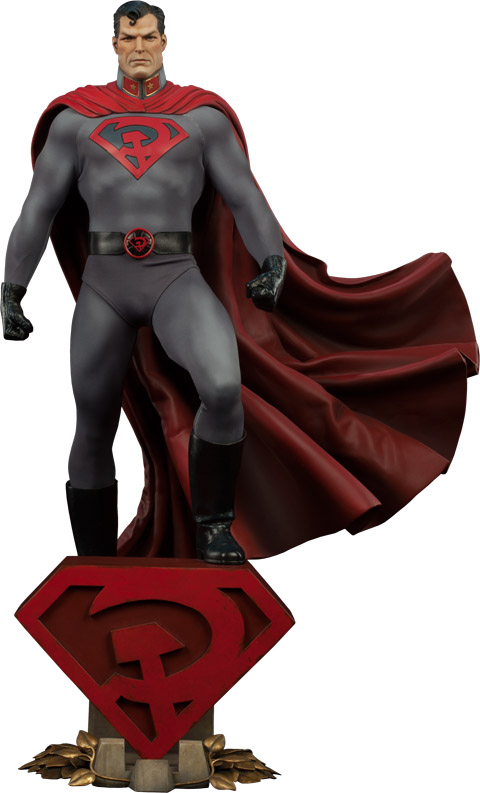 Fighting a never-ending battle for Stalin, socialism, and the international expansion of the Warsaw Pact, the Superman Red Son Premium Format Figure stands tall against the evils of democracy.

What if baby Kal-El’s ship landed in Russia instead of the United States? That was the basic idea that inspired the 2003 Elseworld story, Superman: Red Son, which itself inspired this 25-inch-tall figure of Russia’s Superman, standing on top of a base that resembles the Soviet insignia on his red and grey uniform.

Superman is the first in this new collection and he’ll soon be followed by the Red Son versions of Wonder Woman and Batman.

The Superman Red Son Premium Format Figure will be available Apr 2016 – Jun 2016 but it can be pre-ordered now for $469.99 at Sideshow Collectibles.

This Superman Red Son One:12 Collective Action Figure is based on DC Comics’ 2003 Superman: Red Son by Mark Millar and Dave Johnson. This is who the Man of Steel might have been had he crash-landed in the U.S.S.R. instead of the USA as a […]

Demon to some, angel to others. awesome to everyone. The Hellraiser Hell Priestess Premium Format Figure has such sights to show you. Hellraiser’s Pinhead gets gender-swapped with this 23.25-inch-tall statue that shows plenty of skin… along with plenty of muscle, too, where the skin gets […]