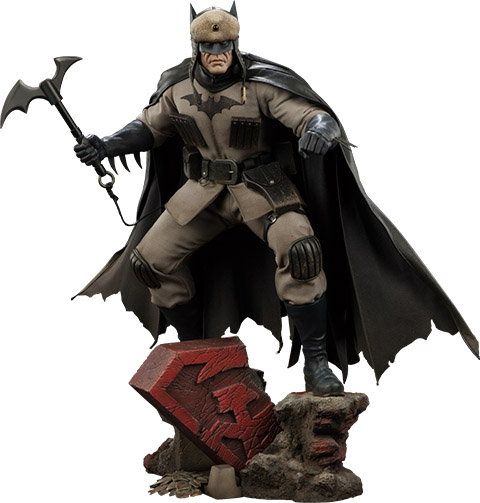 He’s probably not Bruce Wayne but the figure depicted on the Batman Red Son Premium Format Figure is still out for vengeance, set on the path of the Bat when his parents were killed.

Based on the Elseworlds story, Red Son, this 22 1/2-inch-tall statue features a detailed look at the Russian Batman, armed with a bat-shaped grappling hook and standing on a base designed to look like a crumbling version of Superman’s Red Son symbol.

The Batman Red Son Premium Format Figure will be available Sep 2016 – Nov 2016 but it can be pre-ordered now for $489.99 at Sideshow Collectibles. Other figures in the Red Son collection include Superman and Wonder Woman.

The Red Sonja She-Devil with a Sword Premium Format Figure proves that you can still look tough even when wearing a bikini made out of chainmail. Standing 20-inches tall, Sonja, the greatest swordswoman of the Hyborean Age, stands victorious over her latest conquest. I guess […]