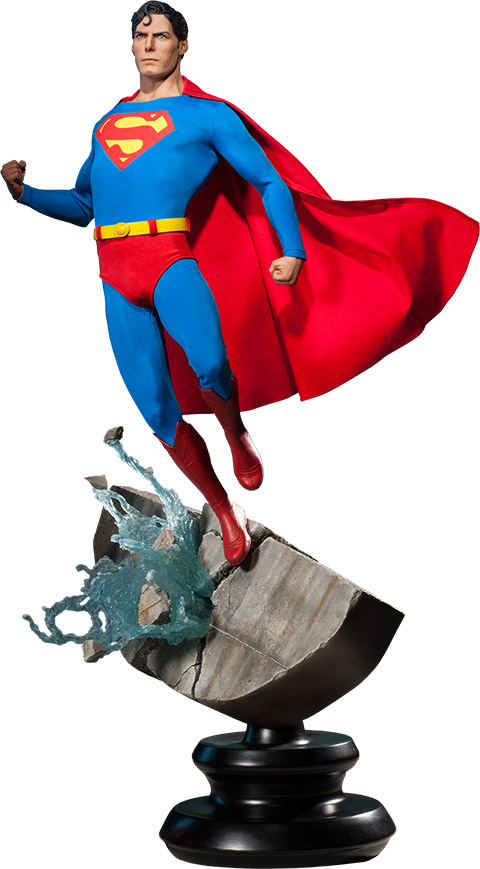 Commemorating Christopher Reeve’s iconic portrayal of Superman in the 1978 Richard Donner film, this two and a half foot tall figure features a lifelike portrait of Reeve, a movie-accurate costume, and a poseable cape. This Sideshow exclusive figure also comes with the green Knowledge Crystal, which created Kal-El’s Fortress of Solitude. The base is modeled after the breaking dam at the end of the film.

The Christopher Reeve Superman Premium Format Figure will be available October 2014 but it can be pre-ordered now for $424.99 (or for as little as $63.75/month) at Sideshow Collectibles. A portion of the proceeds from this figure will be donated to the Christopher and Dana Reeve Foundation.

The Christopher Reeve Superman Maquette will make you believe a man can fly… or at the very least, it will strengthen your belief that Christopher Reeve will always be the ultimate Man of Steel. Standing 29-inches-tall, this polyurethane composite statue is wearing a real fabric […]

The Man of Steel has a seriously cool place to chill on the Superman: Fortress of Solitude Art Print. Maybe it’s just me but this 18″ x 24″ print makes me think of Richard Donner’s Superman, but even if you don’t get that particular vibe, […]

Superman soars into action on the Man of Steel Fortress Of Solitude Screen Print, featuring the latest big-screen version of Krypton’s greatest son, as revealed by the lack of red undies. Artist Luke Butland brings us a limited-edition, hand-numbered and signed poster of Superman soaring […]

Remember a true man of steel with the Superman ‘You’ll Always Be My Hero’ T-Shirt, featuring a great portrait of everyone’s favorite Superman, Christopher Reeve. Many people have portrayed the last son of Krypton over the years, but Christopher Reeve will probably be the one […]

This Superman Man of Steel Premium Format Statue looks every bit as amazing as Superman looks on screen. This statue from Sideshow Collectibles is a hand-tailored replica of Superman in his new suit. The Kryptonian symbol for hope is on his chest and he comes […]