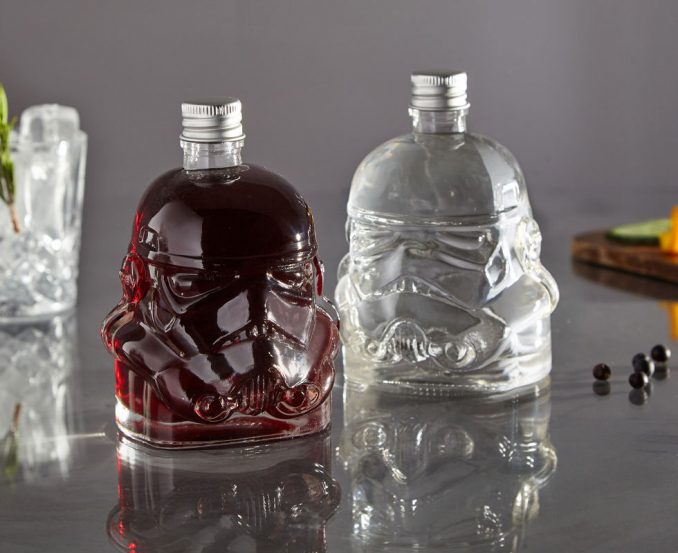 While this Stormtrooper Gin isn’t from a galaxy far, far away, and it hasn’t been to space like the Star Trek Ten-Forward Vodka, it does come in these incredible stormtrooper helmet shaped bottles.

Designed by Shepperton Design Studios (as in Original Stormtrooper), these glass bottles are officially licensed Star Wars merchandise and look just like authentic stormtrooper helmets. Each has a capacity of 250ml (8.5 ounces).

Yet it isn’t all about the bottles, as they do come filled with sophisticated spirits from the award-winning Bimber Distillery. One bottle contains London Dry Gin (40% ABV) with flavors of juniper berries and peppery spices and featuring pleasantly dry and earthy notes with a gentle citrus finish. In the other bottle is Sloe Gin (30% ABV) that’s described as
“fresh berries with a kick of pepper, sweetness meets tangy sour, slightly creamy and softly fruity.”

Unlike the ol’ bucketheads, ensure you never miss a shot with this stunning set of two bottles of stand-out gin – with a nerdy, officially licensed stormtrooper twist.

Let’s start with the bottles – modelled on the authentic stormtrooper helmets designed by Shepperton Studios, of course. Yep, the very same studio that produced and created the originals for the very first Star Wars film back in 1976. Nice.

After rendering the stormtroopers in the finest glass available, they passed them on to the award-winning Bimber Distillery, who filled them with two of their favourite classic gins. Both gins in this galactic twin-set are packed full of specialist botanicals for two uniquely sophisticated spirits. These guys know their stuff.

After opening the box, you’ll have a tough decision on your hands: which gin to use first? Take your choice between…

Or double up and mix ‘em together for a super-charged turbo G&T. Too much? You’re not going to stop the rebel alliance with that attitude!

It’s hot outside, so drinks with ice cubes are a must this time of year. You might as well have some fun with your ice as you are cooling off. That’s what the Gin and Titonic Ice Cube Tray is all about.

Take command of your own UBTECH First Order Stormtrooper Robot. This app enabled robot offers a cutting-edge augmented reality experience and features voice command ability, facial recognition, and patrolling capabilities. It has a camera to provide first person views and to aid in its sentry […]

This Star Wars Stormtrooper Pendant Light is an amazing accessory for any Star Wars themed room. It may seem ironic that an assault trooper for the Dark Side provides light to your room, but you have to admit that it looks incredible. Crafted out of […]

If you spend any time in the kitchen, you probably like to add a dash of citrus flavor to your dishes. Well, the Stem DIY Citrus Juice Sprayer makes it easy. Just spray citrus juice directly from the fruit onto your favorite dish. No more […]