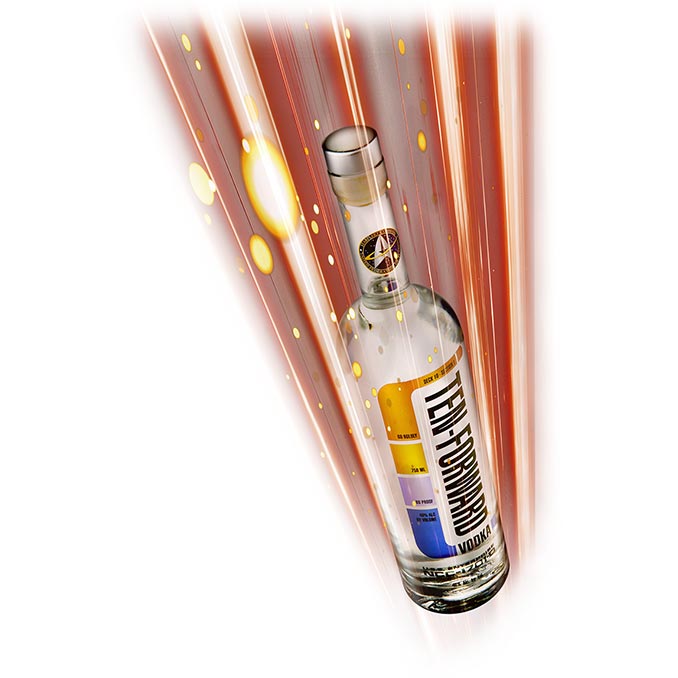 Ten Forward is the name of the lounge on the USS Enterprise-D from Star Trek: The Next Generation where crewmembers could enjoy a beverage from the bar and a game of chess. That’s what makes it a perfect name for the new Star Trek Ten-Forward Vodka.

The bottle and brand logo are obviously inspired by the LCARS (Library Computer Access/Retrieval System) graphical user interface used on display panels and controls throughout TNG. However, the coolest thing about Ten-Forward Vodka isn’t the awesome design—it’s the fact that it’s actually been to space. They are sending a portion of the vodka to earth’s mesosphere using a high-altitude balloon and carefully mixing it with the production so that every bottle has a (small) portion of vodka from space.

(I’ll let the pedantics argue in the comments on whether the mesosphere is considered “space” or “near space” or not, but it’s close enough to be a cool hook for me, even if it is just a gimmick.)

Ten-Forward Vodka is expertly crafted in small batches from American grain and distilled 6 times for a smooth taste. It’s suitable for the Star Trek fan to drink straight or to mix into a delicious cocktail. No word on whether they will sell the cool drinkware featured in the pictures.

Following its descent from space, Ten-Forward Vodka will make its debut. Upon arriving back to Earth, this grain spirit will be carefully protected and blended into the stocks of Ten-Forward Vodka insuring that a portion of every bottle will contain vodka from space, allowing discerning vodka drinkers to go where no man has gone before. Distilled six times from American grain, and filtered through hardwood charcoal, Ten-Forward Vodka is soft and delicate enough to drink straight or mixed into your favorite cocktail. Expertly crafted in small batches, Ten-Forward Vodka is for the Star Trek fan and the vodka aficionado alike.

Sometimes the simplest gifts are the best gifts. This Star Trek TNG Ten Forward Door Cover is the perfect item for the Star Trek fan on a budget. Officially-licensed and very authentic looking, the door cover fits on most standard indoor doors…And the application process […]

Vodka sells itself, but it doesn’t hurt to offer something unique and different. GeekAlerts has shown you specialty alcohols like 100,000 Scovilles Hot Naga Chilli Vodka and Rogue Voodoo Doughnut Bacon Maple Ale in the past, and now this Oddka Vodka is sure to be […]