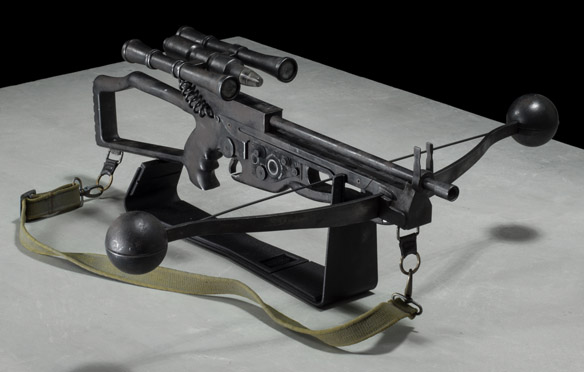 Be like Han Solo and get your hands on the Star Wars: The Force Awakens Chewbacca’s Bowcaster.

Solo and Chewie have been friends for years but The Force Awakens was apparently the first time Han had tried his furry friend’s laser crossbow, known to most Star Wars fans as a bowcaster. The wait was apparently worth it because Han liked blasting Stormtroopers with the bowcaster as much as he enjoyed blasting them with his blaster.

Created using the original 3D digital data from the actual prop featured in the film, this prop replica is probably as close as you’ll get to Chewie’s actual weapon without having to wrestle the Wookie for it.

The Star Wars: The Force Awakens Chewbacca’s Bowcaster is available for $2500 at Star Wars Collectibles.

The Han Solo & Chewbacca ARTFX+ Statue brings Star Wars fans their favorite smuggler with a heart of gold and the “big walking carpet’ that played such an important role in the war against Darth Vader and the Emperor. The pre-painted, snap-fit model kit features […]