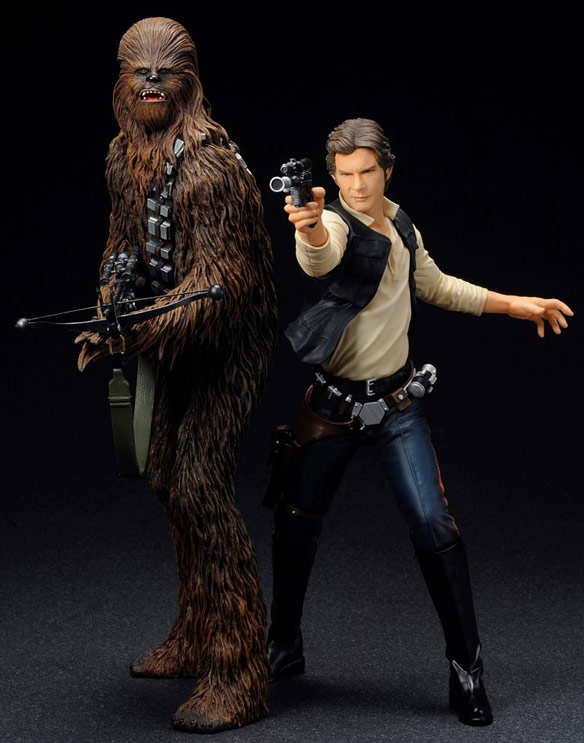 The Han Solo & Chewbacca ARTFX+ Statue brings Star Wars fans their favorite smuggler with a heart of gold and the “big walking carpet’ that played such an important role in the war against Darth Vader and the Emperor.

The pre-painted, snap-fit model kit features Han Solo and Chewbacca as they appeared in Star Wars Episode IV, A New Hope. Solo wears his iconic white shirt/vest combo with orange-striped blue pants and black boots, with his trusty blaster ready for action. Chewbacca, never one to worry about making fashion statements, goes au natural, wearing nothing but his brown fur and his bandolier. He’s armed with his bowcaster to provide backup for Solo.

Han stands just over 7 inches tall and Chewie stands a little over 8 inches on their included display bases. Magnets in their feet provide extra stability.

Follow the fashion sense of two popular Star Wars characters while only taking up space in your closet with one item when you grab the Star Wars Chewbacca Han Solo Reversible Hoodie like the Death Star tractor beam locking on to the Millennium Falcon. There’s […]

Han Solo might have played the role of a lowdown smuggler, but he wasn’t stupid. If I had a seven foot tall Wookiee as a friend/bodyguard I would never travel the galaxy without him either. Sadly you can’t have the real thing, but you can […]