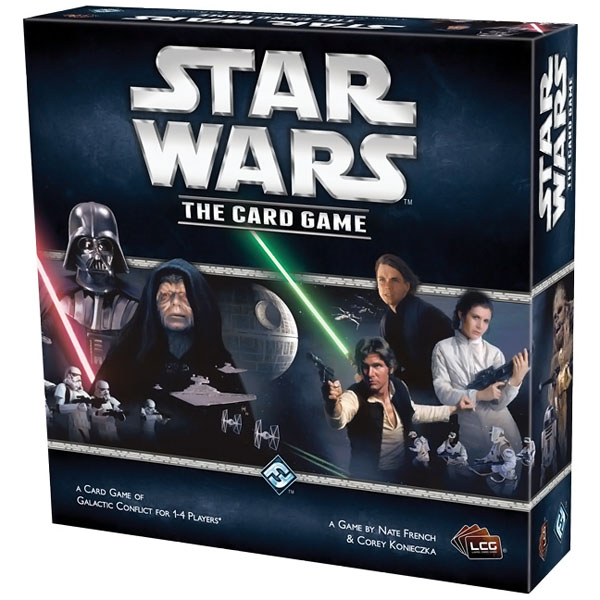 Star Wars fans will not want to miss Star Wars: The Card Game. This two-player head-to-head duel allows you to command the most legendary heroes, villains, and even starships from the Star Wars universe.

This is a deck building game like no other with unique deck construction rules that streamline deck-building. The Core Set comes with everything you need for two players to play and have hours of fun.

The characters, starships, and situations of the original Star Wars trilogy come to life in Star Wars: The Card Game, a head-to-head Living Card Game of tactical combat and strategic planning that allows two players to wage cinematic combats between the light and dark sides of the Force. Command such legendary characters as Luke Skywalker, Han Solo, Leia Organa, Boba Fett, and Darth Vader. Launch strategic assaults against your opponent’s objectives. Tempt fate in thrilling edge battles. Seek to make an ally of the Force or master its power for your own purposes. The Star Wars: The Card Game Core Set contains everything two players need to begin battling for the fate of the galaxy:

Don’t miss out on this one. It is just $31.99 from Amazon.com. You’ll get addicted pretty quick.

If card games are your thing, then I have no doubt that you’ll enjoy this Poo Card Game a lot. It’s a game that’s filled with poo, monkeys, and action. So if you have some long road trip planned anytime soon, then this is the game […]

The Official Doctor Who Card Game

The Official Doctor Who Card Game is the Doctor Who game that you have been looking for. This game is for 2-4 players, ages 13 and up. In this game you will defend your locations, attack the locations of other players, and have a timey-wimey […]