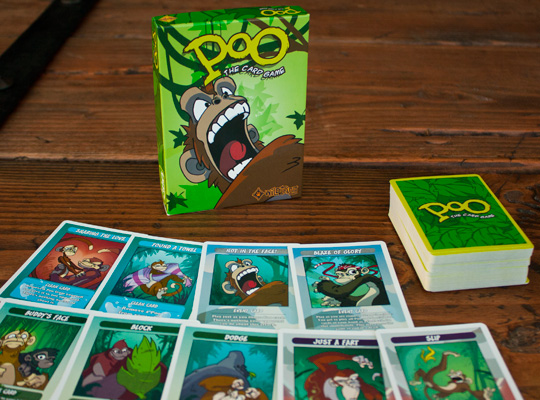 If card games are your thing, then I have no doubt that you’ll enjoy this Poo Card Game a lot. It’s a game that’s filled with poo, monkeys, and action. So if you have some long road trip planned anytime soon, then this is the game to bring along for some in-vehicle entertainment.

The Poo Card Game is a 2 to 8 player game. Basically, each person takes on the role of a monkey, where the goal is to be the one least covered in poop and to be the lone monkey standing after all the poop-flinging action. Each game takes around five to fifteen minutes to play, so it moves fairly fast as well. 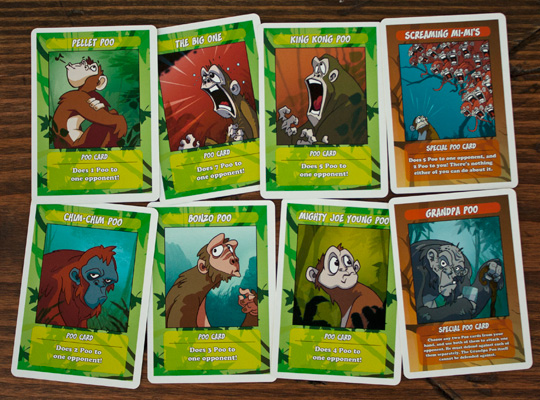 Poo is a fast-paced card game for two to eight players, requiring anywhere from five to fifteen minutes to play. It’s fast and furious – something you can play while waiting in line or on lunch break. Each player takes on the role of a monkey. You fling poo and mess with each other until only one monkey is left standing. That monkey, of course, is the cleanest one. Each turn, every player gets to draw and play a card, usually either to fling poo at another player or to clean himself off. Out of turn, each player gets to play cards to defend himself or foil other players’ poo flinging.

If you think your day might turn into poo, there’s no reason why you can’t start your day with the Emoticon Poo Mug. At least that way it sort of seems like life is completing a full circle. Emoticons are weird. A poo emoticon is […]

Poo probably isn’t the first thing you think of when you’re reaching for something to write a note on, but Elephant Poo Paper proves that poo is useful for a lot more than just burning in a brown bag on your neighbor’s porch. Of course, […]

Stressed and faced with a lot of crap at the office? Then take it out on the crap itself through the Fake Poop Stress Toy. Your colleagues might probably think you’ve gone bonkers and lost all sense of hygiene when they see you squeezing the […]

Say hello to my little friends. No, I’m not talking about Tony Montana’s M16 assault rifle and M203 grenade launcher from “Scarface.” These friends are the lovable little duo that you see almost every day… although in slightly less cuddly form. Say hello to Pee […]

Unicorns might be mythical and magical but they still have to go #2 every now and then, and that magical moment has been captured with Unicorn Poop Bubble Gum. There are all kinds of poop-themed goodies out there, like the Pooping Polar Bear Candy Dispenser […]

Unicorns are magical, colorful, glittery, mythical creatures. They are so magical and awesome that they poop rainbows. Now you can get a piece of the action with this Unicorn Poop Soap. This unicorn poop smells amazing too thanks to vegan-friendly oils. It is magical and […]

Imagine seeing a long piece of poop on your kitchen or bathroom sink. Also, imagine the accompanying scream that such sight will illicit because the Poop Soap doesn’t paint a pretty sight. In fact, it’s downright disgusting and I have no idea who would want […]