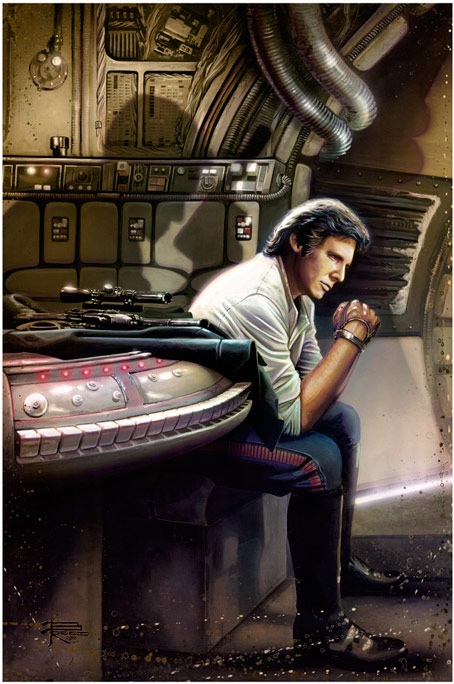 He might seem full of bravado and bluster most of the time but the Star Wars Han Solo Redemption Paper Giclee Art Print provides a look at a more introspective side of the smuggler who became a rebel hero.

One does not simply blow off Jabba the Hutt as if it were nothing more serious than deciding what cereal to eat for breakfast. Ignoring a debt to something like that has consequences… but can you really leave the safety of the galaxy in the hands of a farmboy who keeps talking about some weird Force stuff?

What happened between Solo leaving the rebel base and the Millennium Falcon blasting onto the scene to help Luke destroy the Death Star? We’ll never know for sure but one artist has provided an idea for us – Han sitting at a table, wondering what to do. Behind him, a shadow of his blaster-wielding self; the guy who shot first. What he decides in this moment will determine if he becomes hero or scoundrel… or maybe a little bit of both.

The 19″ x 13″ art print is a limited-edition piece consisting of only 95 prints.

The Star Wars Han Solo Redemption Paper Giclee Art Print will be available January 2015 but it can be pre-ordered now for $125 at Entertainment Earth.

The princess means business on the Star Wars Rebel Princess Paper Giclee Print, and it doesn’t really look like she needs a farmboy from Tatooine to rescue her. With blaster in hand, Princess Leia stands in front of an Imperial symbol on the wall, ready […]

Before there was Boba, there was Jango, and the Star Wars Jango Fett Paper Giclee Print captures the moment leading up to the father unknowingly passing the mantle of bad-ass bounty hunter to his son. Created by artist Christian Waggoner and measuring 19-inches tall by […]