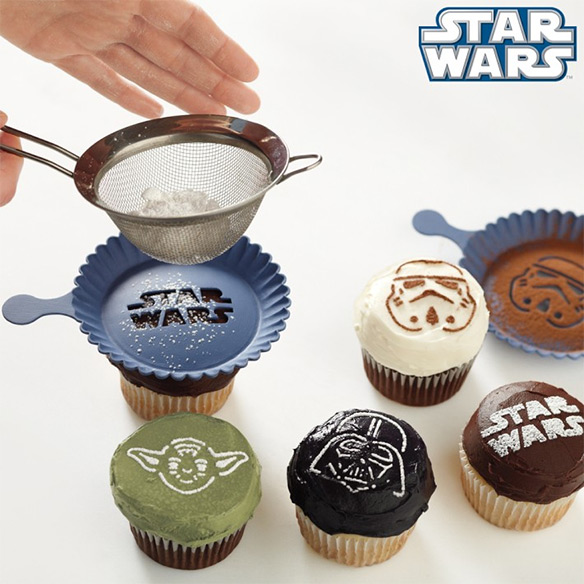 If you thought decorating Star Wars cupcakes would be harder than flying the Millennium Falcon, think again. With these officially-licensed Star Wars Cupcake Stencils and a little powdered sugar or cocoa powder, your cupcakes will be worthy enough for the highest-ranking Jedi in a just matter of minutes. 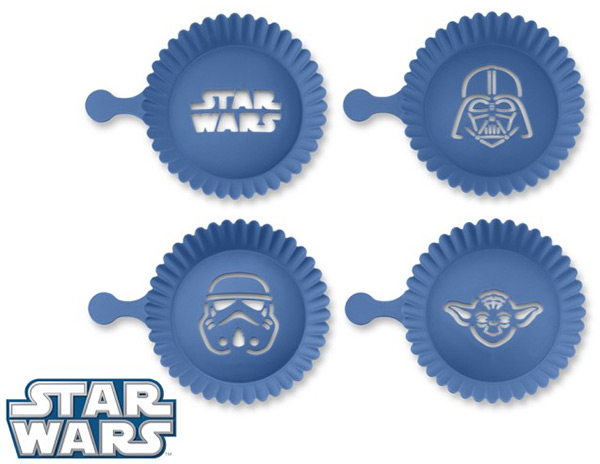 Our set includes Star Wars logo, Darth Vader, Yoda and a Stormtrooper. Just pick your favorite character, lay the stencil on top of the cupcake, then sprinkle with cocoa, cinnamon or decorative sugars. When you remove the stencil, your design will magically appear. Stencils have a slightly domed shape that hugs the surface of a cupcake to guarantee sharp details. Thanks to the stencils’ generous size, sprinkles settle only in the cut-out shape – and not on the outer rim of your cupcake. A lip on the outer edge of each stencil helps collect leftover sprinkles for neater work with less waste.

A lot of us have never learned how to decorate cakes or even bake them. But luckily, such things as cupcakes were invented, along with cake mix, ready-to-eat frosting, and fun decorating tools like these cupcake stencils, so that failure and frustration are completely taken out of the picture. Same idea goes for the Star Wars Galactic Empire Cupcake Decorating Kit that we showcased last year. They’re there to make life easy.

This Star Wars Cupcake Stencil Set is available for $9.95 at Williams-Sonoma. They can also be found at Amazon.com.

Get some extra lives and eat them all up with this 1-Up Mushroom Cupcake Pan. Just bake them, no chasing them through the level required. Now you can bake delicious dessert 1-up cakes and decorate them with frosting. Mario would approve. Each mold makes 4 […]