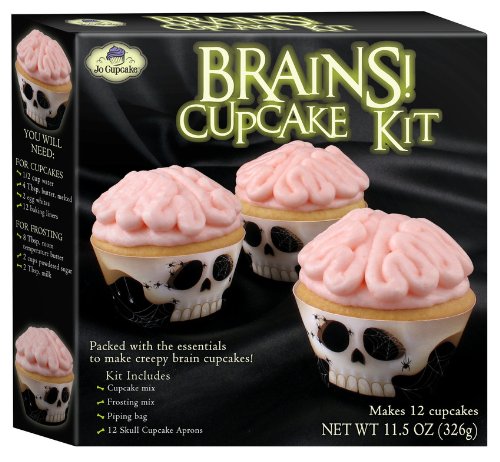 I think the zombie craze began with Popcap’s extremely popular tower defense game, Plants versus Zombies. I have a nephew who’s so into the game that he clamors for everything that has to do with zombies and brains these days. So to surprise him on his birthday, his mother (also known as my sister who doesn’t know how to bake) decided to whip up a batch of zombie-themed cupcakes using the Brains! Cupcake Kit.

And like I said, since she’s not the baking type, the bulk of the mixing actually became my job. But it wasn’t really that hard with the Brains! Cupcake Kit, because it already came with most of the mixes and materials needed to recreate the cupcakes you see on the box.

It would be kind of cool if you baked these cupcakes using the Aristocakes Silicone Baking Cups or Yumbots Robot Cupcake Molds. After all, it’s not only zombies that can have their brains displayed out and about. 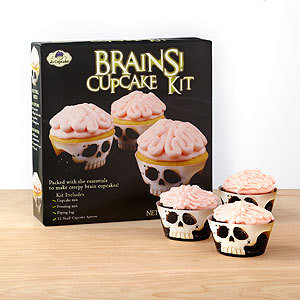 The Brains! Cupcake Kit is available from Amazon for $6.99.

If you thought decorating Star Wars cupcakes would be harder than flying the Millennium Falcon, think again. With these officially-licensed Star Wars Cupcake Stencils and a little powdered sugar or cocoa powder, your cupcakes will be worthy enough for the highest-ranking Jedi in a just matter of minutes. Our set […]

A Zombie Ate My Cupcake Kit

Everyone loves cupcakes. Combine cupcakes with Zombies and you have a winning geek combo in the A Zombie Ate My Cupcake Kit. This recipe book is all about gory and disgusting treats. This illustrated cookbook tells you how to do everything to make gruesome cupcakes, […]