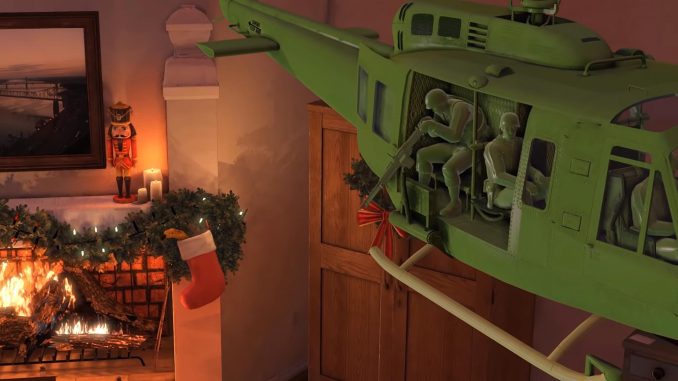 If you loved the old Army Men games from 3DO or wanted to be one of the green army men from Toy Story, you need to check out the Rising Storm 2: Vietnam – Green Army Men Christmas Trailer.

Available for free to anyone that has Rising Storm 2: Vietnam, this Green Army Men Christmas Special allows you to play as toy-sized plastic soldiers battling on foot and in helicopters throughout a home fully decked out in Christmas decorations. There’s the Christmas tree, a train, Hot Wheels tracks, wooden blocks, LEGO pieces, and more.

Tripwire Interactive, Antimatter Games and the Green Army Men Team announced today the launch of the Rising Storm 2: Vietnam – Green Army Men Christmas Special, the toy-sized update for the award-winning and critically acclaimed first-person shooter. Starting today and running through the first week of January 2019 on Steam, players can look forward to taking part in the gritty and strategic 64-player player matches Rising Storm 2: Vietnam is famous for on a brand-new Christmas-themed map where miniature toy soldiers vie for control over fortresses spread throughout a cozy home decorated for the holidays. Take cover behind building blocks, use race car tracks to access new areas, and take advantage of the toy helicopters to gain the high ground.

The Rising Storm 2: Vietnam – Green Army Men Christmas Special update is available for free to all players who own the game. In addition, as part of today’s update, players can also look forward to a free Seasonal M1 Helmet and a host of seasonal themed achievements. And, of course, all the normal Vietnam content will remain available to all players, in case you’ve had too much festivity and need to run through the jungle some more!

Available now on PC, Rising Storm 2: Vietnam is the sequel to Rising Storm, PC Gamer magazine’s 2013 ‘Multiplayer Game of the Year,’ published by Tripwire Interactive and developed by Antimatter Games. Command your team to victory in massive 64-player battles with authentic weapons, aircraft, and maps that pit conventional military forces against guerilla forces.

Recently we posted about Super Mario Gummy Candy, and now we present Gummi Army Guys. These gummy candies look just like the green plastic army men soldiers kids used to play with a generation or two ago. In fact, they still keep the look of […]

Army man toys are fun, but the only mood they set is miniature warfare. However, Green Army Men Candles can set the mood for any occasion as long as that occasion requires candlelight and army guys. They are actually more for your cake then for […]

Storm lives up to her name on the X-Men Storm Art Print, and a classic X-Men villain pays the price when she unleashes the lightning. Ororo Munroe has had a few different looks since making her 1975 debut in Giant-Size X-Men #1 but one of […]

The classic plastic green army men get a shiny upgrade with the White Bronze Cast Army Men, gaining a few extra points in the toughness category to make up for the points they lose in camouflage skills. Designed and manufactured by hand in the United […]