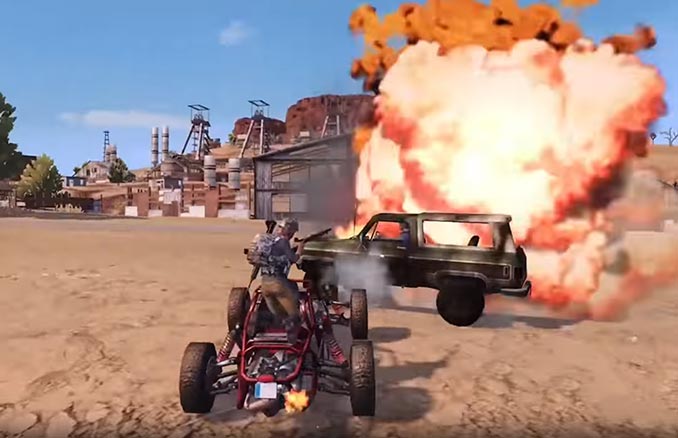 There’s a new update to the mobile version of PlayerUnknown’s Battlegrounds battle royale and they released a PUBG Mobile 0.5.0: Miramar Trailer to show off what’s been added. Most important is the new desert map, Miramar, as well as new vehicles and weapons. There also a new progress mission and new weekly activity missions. There’s a lot more, including a whole list of improvements, that you can read about below the video.

PUBG Mobile is available for Android at Google Play and for iOS at Apple App Store.

Before Fortnite, the PUBG Battle Royale was all the rage. If it’s still your game of choice, you’ll want to check out these 5 new PlayerUnknown’s Battlegrounds PUBG T-Shirts exclusively from Hot Topic. There’s a wide variety of choices, with everything from a fierce battle […]

Tis the season to be giving. So if Bill Gates, Carlos Slim, or JK Rowling is listening, I wouldn’t mind this Marchi Mobile eleMMent RV. Sure I probably couldn’t afford the insurance, but let’s not get ahead of ourselves. This 40 foot long custom made […]

You could be bending down to pick something up off the ground and have your mobile phone just shoot out of your breast pocket and into a puddle of water. You could be in the comfort room doing your thing when your iPod just slides […]

If you’re like most of us you probably use your smartphone for just about everything, but sometimes you need a break. The ePure Mobile Bluetooth Station for iPhone ensures that even when you’re charging your phone you’ll be able to take advantage of all its […]

This handy gadget can transcribe what you write and have the text and illustrations displayed on the LCD screen and stored in the internal memory.

Finally small business merchants can have one less thing to worry about. With NetSecure Kudos Mobile Credit Card Kit you can do most of your credit card billing right from your smartphone, PC, laptop or tablet without any costly monthly charges. With the simple swipe […]