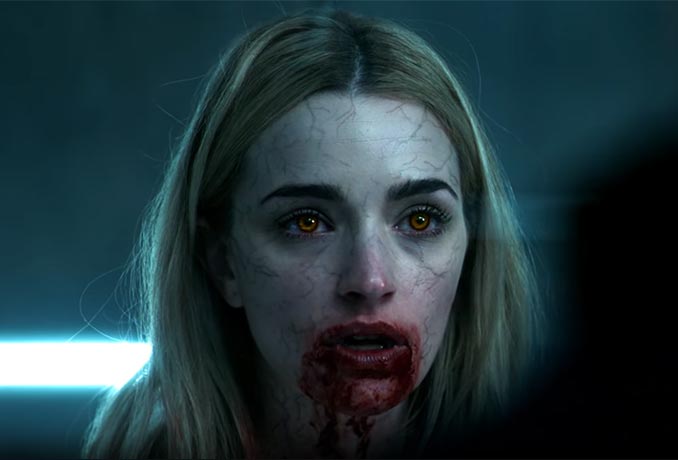 Fox just dropped The Passage Official Trailer for the TV series based on the best-selling trilogy by Justin Cronin. It appears this first season will deal with the beginning of the story leading up to the spread of the contagion throughout America, and save the post-apocalyptic future where vampiric super creatures continually hunt for fresh blood for future seasons.

As The Passage begins scientists are working on Project Noah, experiments with dangerous viruses with the hopes of curing all disease, but at the risk of wiping out humanity. A young girl is needed as a test subject, but the Federal Agent charged with bringing her in decides to protect her at all costs. Eventually they must confront the scientist hunting for them and come face-to-face with the dangerous beings confined at the research center. Beings that are beginning to realize new powers that could help them escape from confinement.

Based on author Justin Cronin’s best-selling trilogy of the same name, THE PASSAGE is an epic, character-driven thriller written by Liz Heldens (“Friday Night Lights”). Executive-produced by Emmy Award winner and Academy Award and Golden Globe nominee Ridley Scott (“The Martian,” “Gladiator”) and writer/director Matt Reeves (“Dawn of the Planet of the Apes,” “Cloverfield”), THE PASSAGE focuses on Project Noah, a secret medical facility where scientists are experimenting with a dangerous virus that could lead to the cure for all disease, but also carries the potential to wipe out the human race.

When a young girl, AMY BELLAFONTE (Saniyya Sidney, “Fences,” “Hidden Figures”) is chosen to be a test subject, Federal Agent BRAD WOLGAST (Mark-Paul Gosselaar, “Pitch”) is the man who is tasked with bringing her to Project Noah. Ultimately, however, Wolgast becomes her surrogate father, as he tries to protect her at any cost. Brad and Amy’s journey will force them to confront Project Noah’s lead scientist, MAJOR NICHOLE SYKES (Caroline Chikezie, “The Shannara Chronicles”), and the hardened ex-CIA operative in charge of operations, CLARK RICHARDS (Vincent Piazza, “Boardwalk Empire,” “Rescue Me”), whom Brad trained. It likewise brings them face-to-face with a dangerous new race of beings confined within the walls of Project Noah, including former scientist TIM FANNING (Jamie McShane, “Bosch,” “Bloodline,” “Sons of Anarchy”) and death-row inmate SHAUNA BABCOCK (Brianne Howey, “The Exorcist”).

In seeking out any allies he can find, Brad also turns to his former wife, DR. LILA KYLE (Emmanuelle Chriqui, “Entourage,” “Murder in the First”), for help. But as Project Noah’s scientists hone in on a cure that could save humanity, these new beings begin to test their own powers, inching one step closer to an escape that could lead to an unimaginable apocalypse.

What happens when a Time Lord consults with a Jedi Master? The universe might find out because the Luminous Beings Art Print shows Matt Smith’s Eleventh Doctor meeting with Master Yoda. Apparently, the Force is cool now. The geektastic artist, James Hance, has created another […]