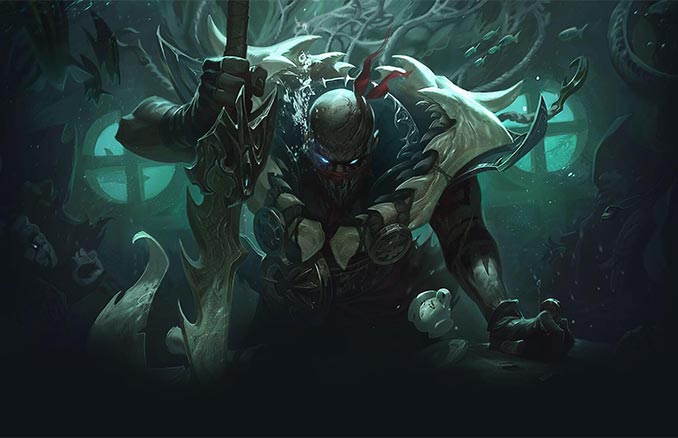 Find out all about the New League of Legends Champion, Pyke: The Bloodharbor Ripper in these videos. The Pyke Champion Trailer features gameplay footage, while the Pyke Champion Teaser Trailers tells the backstory. Keep reading below the videos to learn about Pyke’s abilities: Gift of the Drowned Ones, Bone Skewer, Ghostwater Dive, Phantom Undertow, and Death from Below.

Abandoned by his crew to the leviathans of the deep, Pyke drowned—but didn’t stay dead. Years later, a fabled revenant known as the Bloodharbor Ripper still stalks the Slaughter Docks, crossing names off a list that never seems to end. Wait…you look familiar…

A dead man stalks these salted streets. Pray you aren’t on his list.

Pyke’s shipmates watched him drown. In his eyes, all of Bilgewater is guilty.

As Pyke, you can lurk at the edge of your victim’s vision as you stalk them using Ghostwater Dive. Butcher multiple foes at point-blank range as you resurface with a swift Bone Skewer. Alternatively you can hold the blade a bit longer with Bone Skewer and harpoon a single foe, reeling them toward you before gutting them like a fish. Use Phantom Undertow to aggressively rush your enemies, damaging and stunning them as your crew closes in to help. Weak enemies can be finished off with Death from Below.

PASSIVE: GIFT OF THE DROWNED ONES

When Pyke is unseen by enemies, he rapidly regenerates some of the health recently lost to enemy champions.

Tap: Pyke stabs and greatly slows all enemies in front of him.

Hold: Pyke readies and then throws his harpoon, impaling the first enemy struck and pulling them a fixed distance towards him.

Pyke dives into spectral waters, entering camouflage and gaining a significant increase to his movement speed that decays over a few seconds.

Pyke dashes, leaving behind a drowned phantom. After a delay, the phantom returns to Pyke, damaging and stunning enemies it passes through.

R: DEATH FROM BELOW

Pyke strikes in an X-shaped area, blinking to champions and executing those below a certain flat amount of health. Enemies in the X that are not executed take damage equal to this amount.

When a champion dies in the X, the last ally to assist also gains full kill gold, and Pyke can instantly use Death from Below again for a short period of time.

In the mood to roast some marshmallows? Want to skew some hot dogs? If you want to do either but don’t want to do it the traditional way with sticks, then you might want to check out the Reel Roaster Marshmallow and Hot Dog Skewer […]

Even if you’re a huge fan of serial killers (Yikes!), you probably don’t know Jack when it comes to this particular version of a certain Ripper in Whitechapel. The Jack the Ripper Premium Format Figure is from the Dead collection, and dead is exactly where […]

Do you still have a lot of good music on cassettes and vinyl, but no device to play it on? The Instant Music Vinyl & Cassette Ripper ($82) will make it easy to convert your records and cassettes into crisp, clear digital audio (MP3, WAV, […]

What a difference a few decades make.  Today we have 3D televisions, cutting edge video gaming systems and think nothing of spending $60 for that new video game.  In the 50’s, you probably had a small black and white tube TV and you would treat […]

A lot of games are getting some pretty cool upgrades and tie-ins lately. There’s the World of Harry Potter Clue Game for one, and the Chocolate Fix game that uses really appetizing tokens. Now here’s another board game that’s out of the ordinary: the LEGO […]

If you’re into DIY stuff but don’t really have the time to build or forge a table from scratch, then do it in a semi-DIY way with the Creative bOne Chair. There are only two problems though: 1) It’s not for sale and is an […]