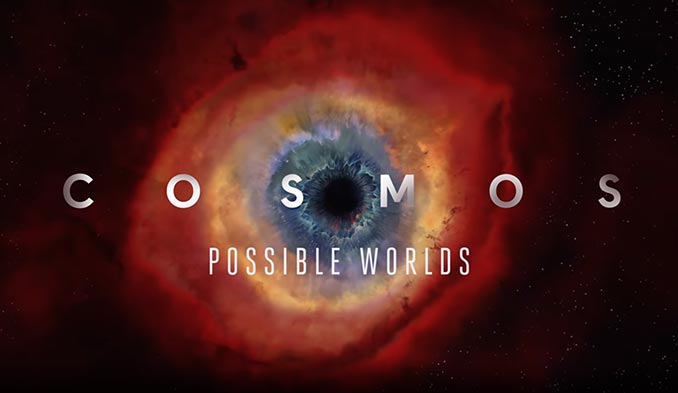 Watch the Cosmos: Possible Worlds Official Trailer for a preview of what you’ll see in Spring 2019 when this Emmy and Peabody Award-winning television series returns for its third season.

Airing as a global event on FOX and National Geographic, the Emmy and Peabody Award-winning COSMOS will return for its third season in Spring 2019. It will once again be executive-produced, written and directed by Ann Druyan and executive-produced by Seth MacFarlane, Brannon Braga, who also is co-writer and director of the series, and Jason Clark.

Neil deGrasse Tyson, the famed pop-culture icon, astrophysicist and host of the Emmy Award-nominated “StarTalk,” will return as host. Co-created by the legendary astronomer Carl Sagan and Ann Druyan in 1980, COSMOS has transported a global audience to the farthest reaches and most deeply hidden recesses of the universe. In the course of those journeys, the series has examined the real stories of the forgotten searchers who helped us understand our place in the universe.

Continuing the legacy of its predecessors, COSMOS: POSSIBLE WORLDS will translate the revelations of science into a lavishly transporting experience, taking audiences on a series of spiritual voyages of exploration. We are living in the golden age of discovery of new worlds to explore and possibly inhabit. In the vastness of time and the immensity of space, their number and the stories they contain are virtually infinite. The new season will reveal previously uncharted realms, including lost worlds and worlds to come, and those that we may one day inhabit in a thrilling future we can still have.

Taking a hike at night can be tricky because you need to be able to see where you’re going but a flashlight leaves you one hand short. The Uncle Milton National Geographic Expedition Shoe Lights let your feet light the way while leaving both your […]

If you can’t get enough Nicolas Cage, take a look at the Between Worlds Official Trailer. In this mystery thriller, he plays a down-on-his-luck truck driver that meets a spiritually gifted woman with a comatose daughter. The woman convinces him to find the lost soul […]

The Doctor Who Green Fashion Cosmos Wallet is stylish way to hold all of your Earthly currency. This bi-fold wallet features a bold and instantly recognizable design inspired by the TARDIS. It has plenty of space for cards, cash, and even psychic paper. There is […]