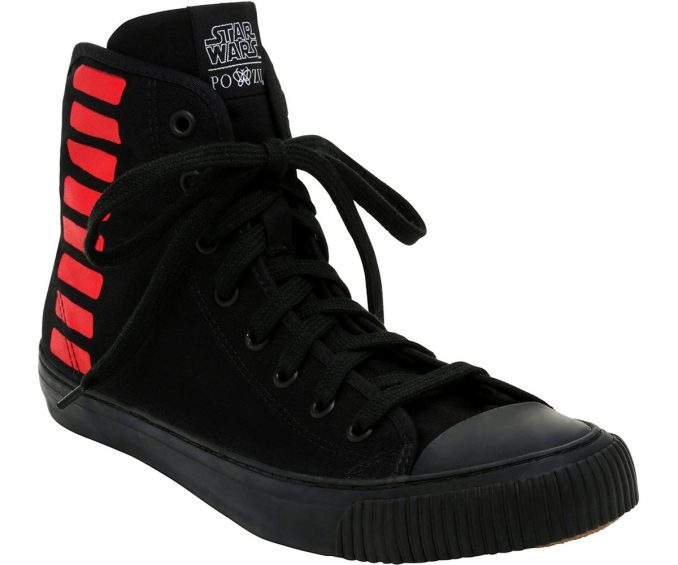 Has anyone ever told you that you look like a ruggedly handsome smuggler? They might be more likely to if you’re wearing these Po-Zu Star Wars Han Solo High Top Shoes.

These officially-licensed sneakers feature a Corellian Bloodstripe stripe along the side, similar to the one down Han’s pant leg. They’re made of organic cotton and Fair Trade rubber, so you won’t feel like a scoundrel when you wear them. Lace them up and you’ll feel like you’re ready to battle the Empire with the confidence to make the Kessel Run in less than twelve parsecs.

The perfect sneakers for a smuggler and a rebel. These high top vegan lace-up sneakers are made from organic cotton and feature a Corellian Bloodstripe stripe along the side.

High-top vegan lace-up Sneaker in organic cotton and a Fair Trade rubber sole. The HAN SOLO sneakers have subtle yet striking details synonymous with the legendary Han Solo character: a Corellian Bloodstripe stripe along the side.

If you’re a rebel, you might just want to wear these Po-Zu Star Wars Resistance High Top Shoes. They’re the perfect fashion statement for the Star Wars fan, that is unless you’re more of a rogue like Han Solo. These high top lace-up sneakers are […]

GeekAlerts showed you the unique Unicorn Leather Sneakers the other week, but maybe those weren’t for you. Are you more of cat person? If so, these Kitty Cat Leather Sneakers might be the better option. The LED light-up soles, high-top platform, and fuzzy kitty cat […]