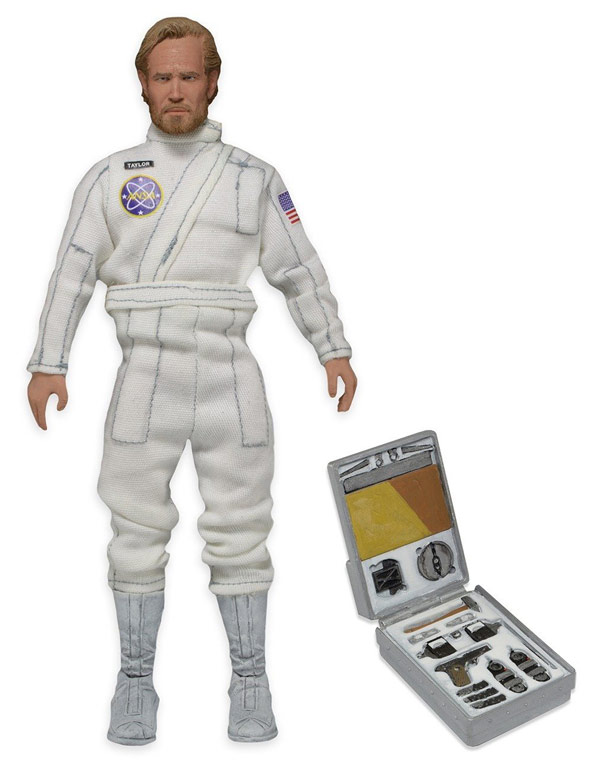 Those darned dirty apes! The Planet of the Apes Classic George Taylor Clothed 8-Inch Action Figure lets you relive the days of Earth being ruled by its Simian overlords long before Mark Wahlberg, James Franco, or Gary Oldman were brought into the franchise.

The poseable 8-inch articulated figure, which actually looks like Charlton Heston, is dressed in real fabric clothing and comes with a removable backpack that can be opened. Now it’s possible to scream at a shattered Statue of Liberty as only Heston can… and be sure to tell anyone who tries to touch your Apes collectibles to take their stinking paws off your stuff.

Step back into 1968. The Planet of the Apes Classic George Taylor Clothed 8-Inch Action Figure will be available January 2015 but it can be pre-ordered now for $24.99 at Entertainment Earth.

Fans of Weird Al are going to love displaying this “Weird Al” Yankovic Clothed 8-Inch Action Figure in their home. The legendary Weird Al is now a retro clothed action figure. More versions of Al will be coming in the future, but this is the […]

This The Hateful Eight Movie 8-Inch Clothed Action Figure Set is a must for Quentin Tarantino fans. NECA’s retro clothed action figure line now includes all eight main characters from The Hateful Eight! The likenesses are uncanny. This limited edition release is only 3,000 sets. […]

The LEGO Life of George set is really quite an interesting concept for geeks and children alike. In the box, you receive a Play Mat, many pieces of LEGO fun, and instructions telling you to buy the free application on your iPhone that is titled […]

This National Lampoon’s Christmas Vacation 8-Inch Scale Chainsaw Clark Action Figure brings Clark Griswold to life, so you can re-enact all of your favorite movie scenes. It is a great way to celebrate over 25 years of craziness. This fully poseable Clark Griswold figure stands […]