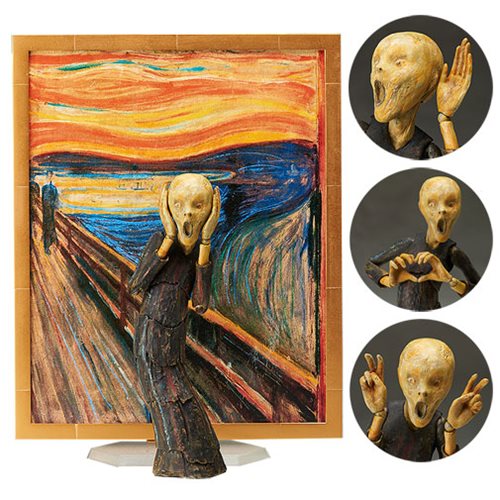 How do you pose a scream? With The Scream Figma Action Figure, which gives new life to the work of Edvard Munch.

When Munch created the classic work of art known as The Scream, I seriously doubt he imagined his anguished character eventually becoming an action figure, but that’s where we are now.

Standing approximately 5 1/2-inches tall, the poseable figure almost appears to be the stuff of nightmares when given 3D form.

As if an articulated action figure based on a classic work of art isn’t enough, the figure also comes with an articulated figma stand, several interchangeable hand parts, and a special frame part that can be placed behind the figure to recreate the classic masterpiece. 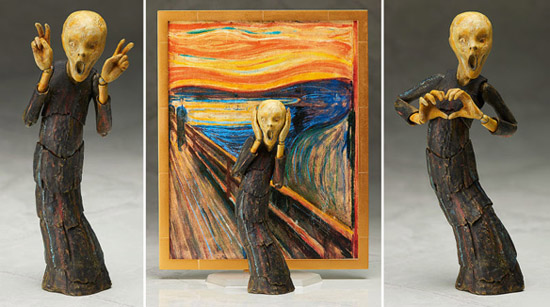 The Scream Figma Action Figure will be available July 2017 but it can be pre-ordered now for $59.99 at Entertainment Earth.

The Man of Steel, and his arch-nemesis, get artsy with the Superman ‘The Scream’ T-Shirt. Edvard Munch gave us The Scream, and that was nice of him, but any work of art can be elevated to the next level with a few well-placed superheroes. In […]

The doctor is busy but the Silent Hill 2 Bubble Head Nurse Figma Figure can see you now. If you’re feeling healthy now, she guarantees you won’t by the time she’s done with you. With hi-tech medical instruments like a knife and metal pipe in […]

Two iconic screams are blended together on the Scream Home Alone T-Shirt, showing that the wearer has refined artistic taste while also having the ability to enjoy a light-hearted holiday comedy. Remember Macaulay Culkin? Yeah, he didn’t exactly set Hollywood on fire, did he? Still, […]

Convert a series of pictures into a comic strip, complete with voice bubbles, using the Comic Strip Photo Frame. We’ve posted about a lot of unique digital photo frames, but this is a traditional picture frame for regular pictures like the Polaroid Style Picture Frame, […]

Remember the Illuminating Levitating Earth Globe? From the same German company comes this electromagnetic photo frame. Two electronic magnets, one in the foot and one at the top, controls the distance between the black/chrome arch and the frame. A standard magnet makes sure the […]