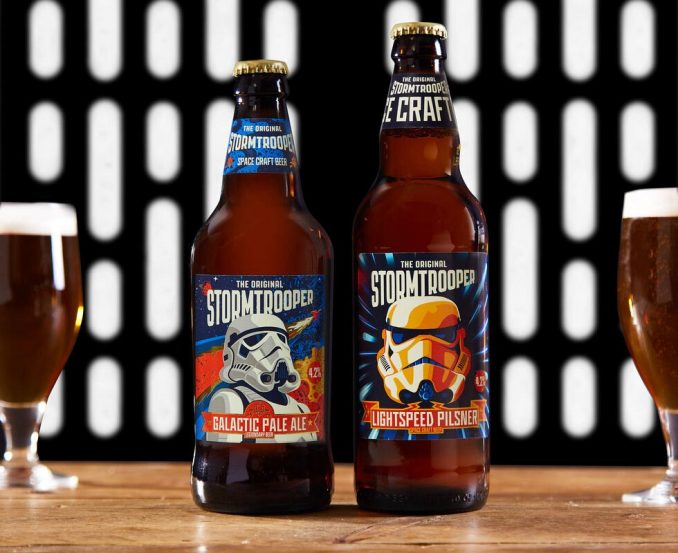 After a long week of battling rebel scum, there’s nothing better than relaxing with a couple of bottles of Original Stormtrooper Beer. Perhaps start with a Lightspeed Pilsner, a classic lager, and then move over to a Galactic Pale Ale, hoppy, citrus-infused beer.

Too hipster for lousy cantina ale, the Original Stormtroopers have banded together to create their very own beers. Choose between the hoppy, citrus infused Galactic Pale Ale or Lightspeed Pilsner, a classic lager with a twist of grass alongside subtle malt undertones. Almost as difficult a choice as which side of the force to join.

Being part of an evil dictatorship army is thirsty work, so it was only fair these white-helmeted sharp-shooters have access to the finest brews in the galaxy. What a fantastic incentive to blast even more rebels: an ice cold bottle of the perfect pale ale or pilsner at the end of it all.

Available exclusively at Firebox.com, Original Stormtrooper Beer is £24.99 for an 8-pack of either Galactic Pale Ale or Lightspeed Pilsner. Unfortunately for those of us that live elsewhere, it is currently available only for shipping to the UK.

This Beer Infused Ice Cream doesn’t contain any alcohol anymore although it’s infused with beer, since the alcohol itself was evaporated during the cooking process. Despite that fact, I doubt any parent would want their kids getting hooked on this frozen treat anytime soon. This […]

Getting into the “Holiday Spirit” can be tough, especially if you have a large family. And we adults know how helpful alcohol can be in those times 😉 Just grab the Santa’s Beer Belly Pilsner Glass, fill it to the top with your favorite specialty […]

Ask any wine expert and they will tell you that the shape of the glass has an impact on taste. It works the same with beer, which is now more important than ever because people are drinking complicated flavorful beer. Get the most out of […]

Real men can’t get enough beer. When it’s time to clean up, you might as well use Beer Soap. It will make you smell like beer of course. Don’t worry about harsh chemicals. It’s made from all natural vegan ingredients. Not actual beer. You can […]