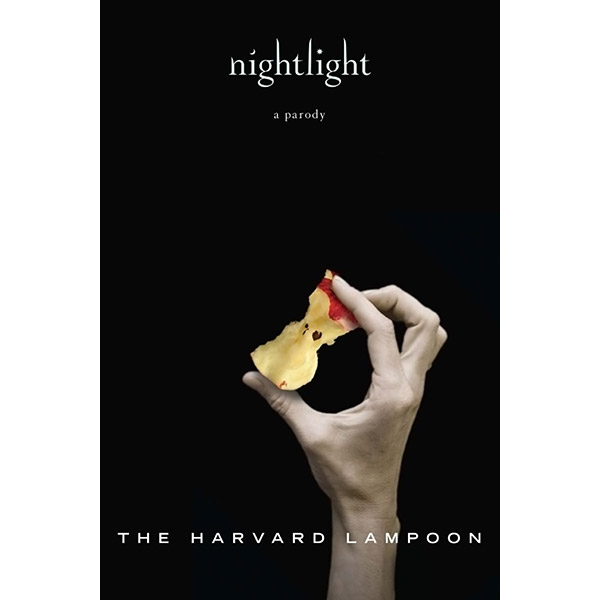 I’ll admit that I’ve never read any books in the Twilight Trilogy nor have I seen the movies. However, I know a lot of fans who’ve read each book cover to cover many times and seen each movie on the first day of release and multiple times thereafter. I’ve seen plenty of media coverage, plus I’ve read How Twilight Works on The Oatmeal, so I think I’m part of the group that will enjoy reading Nightlight much more than reading Twilight.

About three things I was absolutely certain. First, Edwart was most likely my soul mate, maybe. Second, there was a vampire part of him–which I assumed was wildly out of his control–that wanted me dead. And third, I unconditionally, irrevocably, impenetrably, heterogeneously, gynecologically, and disreputably wished he had kissed me.

And thus Belle Goose falls in love with the mysterious and sparkly Edwart Mullen in the Harvard Lampoon’s hilarious send-up of Twilight.

Pale and klutzy, Belle arrives in Switchblade, Oregon looking for adventure, or at least an undead classmate. She soon discovers Edwart, a super-hot computer nerd with zero interest in girls. After witnessing a number of strange events–Edwart leaves his tater tots untouched at lunch! Edwart saves her from a flying snowball!–Belle has a dramatic revelation: Edwart is a vampire. But how can she convince Edwart to bite her and transform her into his eternal bride, especially when he seems to find girls so repulsive?

Complete with romance, danger, insufficient parental guardianship, creepy stalker-like behavior, and a vampire prom, Nightlight is the uproarious tale of a vampire-obsessed girl, looking for love in all the wrong places.

Nightlight: A Parody is available on paperback for just $10.49 at Amazon.com. Also check out the Hunger Games Parody Book.

LED Nightlight for the Toilet

Tried waking up in the middle of the night to go to the loo and bumped your knee or shin against a cabinet, chair, or on the toilet itself while you’re on the way? (Or worse for guys, and the girls that live with them, […]

This Very Thirsty Vampire Parody is a parody of the board books that little kids read. It is all about a vampire that just happens to be a very thirsty vampire. It is a follow-up to the highly successful The Very Hungry Zombie. As the […]

I’m usually not a nightlight kind of guy, preferring to face the monsters in my closet head-on, but the Glo Color-Changing Nightlight with Portable Glowing Balls could make me rethink the whole idea of living in the dark. There’s no electronics in them and they […]

This adorable night time companion will transform your bedroom into a wonderland of twinkling stars. There are eight different genuine constellations to choose from and three soothing color options: blue, green or amber.

Grow your own Crystal Nightlight

This Grow your own Crystal Nightlight kit is all about science. Learning through doing is always a great way to learn. With this kit, kids ages 8 and up can grow their own golf-ball-sized crystal out of potassium aluminum sulfate. The kit has everything you […]