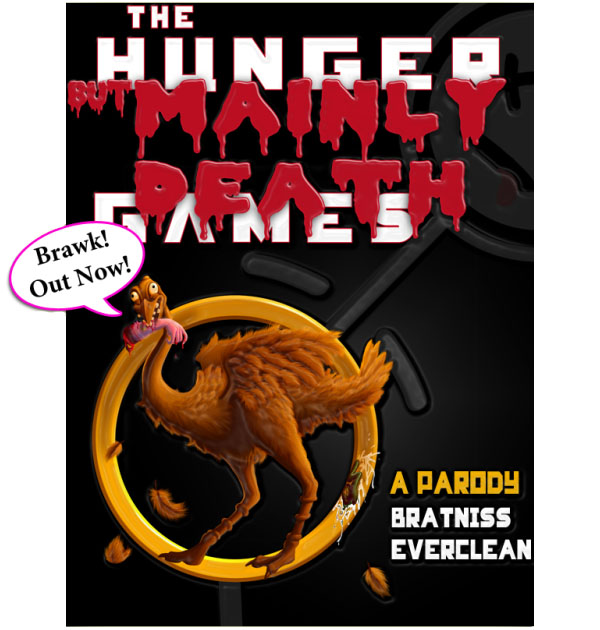 Have you read the entire Hunger Games trilogy and watched the first movie, but you’re still hungering for more? The next movie, The Hunger Games: Catching Fire, isn’t due for release until the end of November, 2013. So to hold you over you can read The Hunger But Mainly Death Games Book. This is supposed to be a hilarious parody, so if you enjoy Harvard Lampoon style parodies, this book should keep you laughing all the way through.

Mockstrich season has begun. Welcome to “The Hunger But Mainly Death Games,” the hilarious Hunger Games parody, and the only book brave enough to suggest that Suzanne Collins’s epic trilogy was way more about death than food.

Or at least this is what Bratniss Everclean discovers, when she leaves the comforts of Slum 12, Pandumb’s garbage dump, to shortsightedly volunteer for a teenage death tournament. But she soon realizes there are fates worse than death…like weirdly having to date her fellow competitor, and lifelong stalker, Pita Malarkey. Okay, okay, it’s not worse than DEATH, but it’s still pretty annoying.

Order The Hunger But Mainly Death Games on paperback for only $6.27 from Amazon.com. If you have a Kindle you’re in luck, because the Kindle Edition is just $0.99!

May the dentist be ever in your favor when you start chowing down on the Hunger Games District Chocolate Bars, because not even Effie Trinket can help you look good if poor dental hygiene takes away your smile. There won’t be any hunger in your […]

If you’re planning to see “The Hunger Games” when it opens in theaters on March 23, you’re going to have to call upon your survival skills to land a prime spot on the battlefield. Wearing a pair of Hunger Games Logo Hoop Earrings will empower you […]

If you’re a Hunger Games fan, this is your chance to crawl into bed with Josh Hutcherson, or at least it can feel like that when you snuggle up to the Hunger Games Movie Peeta Mellark Polar Fleece Bed Throw. Peeta’s looking all kinds of […]

Know what time it is without letting on that you know what time it is when you strap on the Hunger Games Commando Watch. It’s always convenient to wear a watch, but sometimes when people spot your watch they think they have license to ask you what […]

The Hunger Games was a pretty good movie. The book is even better. But real life hunger games are no fun. That’s why it’s best to bring a lunch with you. This The Hunger Games Lunch Box will do just fine. If you are a […]