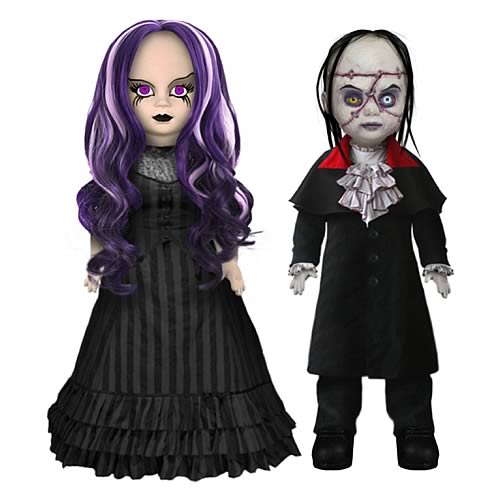 This twisted version of the classic story features a Beauty dressed all in black, making her purple hair and eyes, really stand out, but her macabre transformation pales when compared to the new look of the Beast. Instead of a big, cuddly kitty (or whatever he was supposed to be in the cartoon), we have something that looks more similar to Frankenstein’s monster, complete with two mismatched eyes that obviously didn’t come from the same body. However, he does look dashing in his little Victorian-era coat, doesn’t he?

The bright and cheerful stuffed dolls might be okay for the little ones, but if your tastes run more towards creepy than cute the Living Dead Dolls Rotten Sam and Sandy Set are the playthings you’re looking for. Standing 10-inches tall, these two macabre munchkins […]

Steampunk fans looking for a little retro action will appreciate this Victorian Retro Phone Handset. Just plug it into any phone that has a 3.5mm jack and you’ll be on your way to enjoying your calls in Victorian era style. The Victorian Handset measures roughly […]

Temptation and pain have never looked as cute as they do with the Living Dead Dolls Hellraiser III Pinhead Red Variant. Red like the blood that flows through your veins, this 10-inch-tall Living Dead Doll features Pinhead looking cuter than he ever has before. In […]