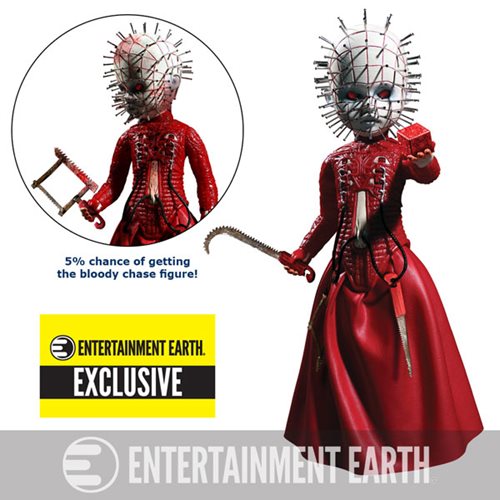 Temptation and pain have never looked as cute as they do with the Living Dead Dolls Hellraiser III Pinhead Red Variant.

Red like the blood that flows through your veins, this 10-inch-tall Living Dead Doll features Pinhead looking cuter than he ever has before. In addition to his red outfit and red eyes, the figure has variants randomly inserted throughout the production run so you’ll never know exactly what you’re getting, although there’s a 5% chance that a bloody chase figure will be included.

The Living Dead Dolls Hellraiser III Pinhead Red Variant will be available December 2016 but it can be pre-ordered now for $TK at Entertainment Earth.

We have such sights to show you… and one of those sights is the Hellraiser Pinhead Premium Format Figure. Clive Barker’s twisted imagination introduced us to Pinhead back in 1987 with the first film in the Hellraiser franchise, and now you can bring the lovable […]

The Hellraiser III Pinhead 12-Inch Vinyl Action Figure is going to scare your other action figures off the shelf. It shows pinhead in all his horrifying glory. Check out all of those amazing details. Everything from his flayed flesh to his attire is perfect. This […]

Oh, no tears please. It’s a waste of good suffering… and the Hellraiser Pinhead Life-Size Bust doesn’t like to waste good suffering. Horror fans might not be able to summon Pinhead by solving the Lament Configuration but you can still bring the Cenobite leader into […]

This Hellraiser III Pinhead Stylized 6-Inch Action Figure is sculpted in a super deformed style and features his trademark pins in his head. He is made of real metal. He has 8 points of articulation and comes with two sets of arms and two interchangeable […]

Does anyone know where the insult ‘pinhead’ came from exactly? I think the word existed before the guy from Hellraiser hit the big screen. Perhaps these Pinhead Pushpins capture who the true pinheads really are: mindless dudes in blue suits squandering loads of other people’s cash on Wall St.?

The man behind the pins has added a little extra something to this Autographed Pinhead Pop! Vinyl Figure, and it’s not a one-way ticket to the underworld, so relax… and enjoy the sights he has to show you. Standing 3 3/4-inches tall, the leader of […]

They have such sights to show you. Are you ready to see? If so, this Hellraiser Puzzle Box might possibly summon Pinhead and his Cenobite gang. Based on the specifications of the original boxes from the movies, Hellraiser and Hellraiser 2, these 3″ x 3″ […]