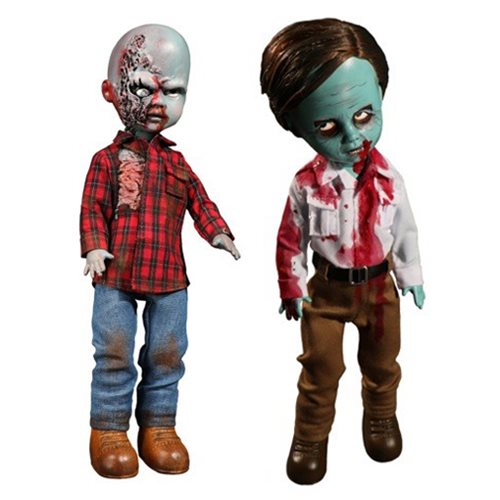 Before Carl and Rick and all those other guys, there were the brave fighters in Dawn of the Dead, who proved that even when all seems lost, the mall is the best place to be.

Standing 10-inches tall, Plaid Shirt Guy is a true undead celebrity, with his ugly mug appearing on the Dawn of the Dead Poster. Meanwhile, Flyboy (AKA Stephen Andrews) is feeling a little blue after the zombies take a few nibbles from him, transforming him from hero to villain towards the end of the film.

The Living Dead Dolls Dawn of the Dead Flyboy and Plaid Shirt Zombie Set will be available June 2017 but it can be pre-ordered now for $79.99 at Entertainment Earth.

November 11 is Armistice Day, celebrating the end of World War I. It is also known as Remembrance Day, and in America, this date is now celebrated as Veterans Day, where all military veterans are honored. This makes today an ideal day to introduce the […]

The bright and cheerful stuffed dolls might be okay for the little ones, but if your tastes run more towards creepy than cute the Living Dead Dolls Rotten Sam and Sandy Set are the playthings you’re looking for. Standing 10-inches tall, these two macabre munchkins […]