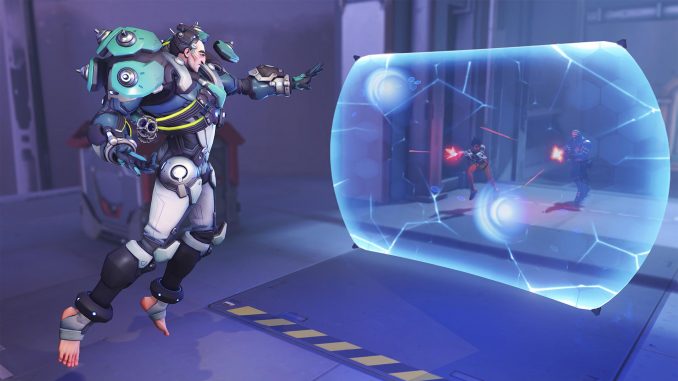 We first saw Sigma and learned of his unique abilities in the Sigma Origin Story video, but now he is playable.  Get a good introduction to him in the New Overwatch Hero Sigma Gameplay video below and learn more details in the Developer Update video at the bottom of this page.

Then dive right in and play Sigma, as this tank is now available with today’s Overwatch Patch 1.39.1.0.  As usual for the introduction of a new hero, the No Limits game is an option in Arcade, giving everyone the ability to test out this character.

No one escapes gravity. Sigma is ready to begin the experiment.

Sigma is an eccentric astrophysicist and volatile tank who gained the power to control gravity in an orbital experiment gone wrong. Manipulated by Talon and deployed as a living weapon, Sigma’s presence on the battlefield cannot be ignored. Sigma launches two Hyperspheres (gravitic charges), which bounce off walls and implode after a short duration, damaging enemies within a sizable radius. Using Experimental Barrier he propels a floating barrier to a location of his choosing and he can dismiss the barrier at any time. With Kinetic Grasp Sigma freezes incoming projectiles in midair, converting them into shields. Sigma uses Accretion to gather a mass of debris, then flings it at an enemy, knocking them down. Unleashing his full powers with Gravitic Flux, Sigma takes flight, lifts enemies in a targeted area, and launches them into the sky before slamming them back down.

Learn more about it in the latest Developer Update with Jeff Kaplan:

Join Jeff Kaplan as he discusses Overwatch’s 31st hero: Sigma! He provides some insight into his back story, abilities, and overall strategy. Sigma is currently available for testing on the PTR.

There’s a new tank hero coming to Overwatch, that you can learn about in this New Overwatch Hero Sigma Origin Story Video. Sigma is a tank, with the unique ability to control gravity. His abilities are: HYPERSPHERES Sigma launches two gravitic charges, which bounce off […]

We saw the Baptiste Origin Story Video a few weeks ago, and now the New Overwatch Hero Baptiste has been released. Just fire up Overwatch and install the March 19, 2019 update (Patch 1.34.0.1) to play with the new hero. Everyone will want to play […]

We had a first look at the new Overwatch hero Wrecking Ball about a month ago. (Check out that previous article for the origin story video, developer update, and a list of abilities.) Previously it was available for testing in the PTR, but now Overwatch […]