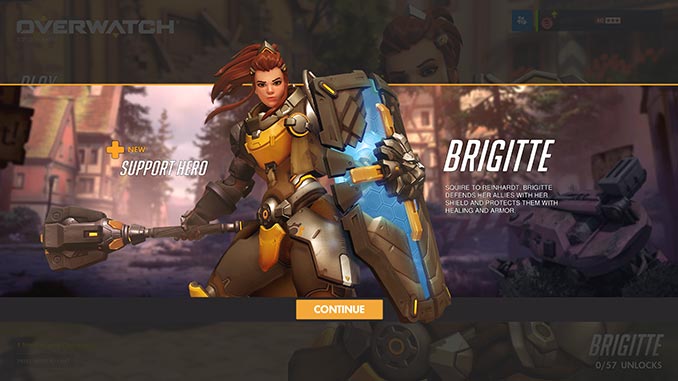 We told you about the New Overwatch Hero a few weeks ago (including the abilities, ultimate, and orgin story), and now the New Overwatch Hero Brigitte is available to play. (Before today, she was only available to play on the Public Test Region PTR.) There is also a cool new gameplay trailer that shows off her skills a tells a bit more of her backstory.

Meet Brigitte—a former mechanical engineer turned squire who fights on the front lines to protect those in need.

Brigitte Lindholm specializes in armor. She can throw Repair Packs to heal teammates, or automatically heal nearby allies when she damages foes with her Flail. Her Flail is capable of a wide swing to strike multiple targets, or a Whip Shot that stuns an enemy at range. When entering the fray, Barrier Shield provides personal defense while she attacks enemies with Shield Bash. Brigitte’s ultimate ability, Rally, gives her a substantial short-term boost of speed and provides long-lasting armor to all her nearby allies.

Watch the trailer above to get fired up to play as Brigitte, and then launch Overwatch and install the 3/20/18 patch. She isn’t available in competitive until season 10, so go with Quick Play or Arcade to play as, along side, or against this new hero. Everyone will be anxious to try out Brigitte, so 6V6 No Limits is one way to go to be sure you can play her.

A couple weeks ago we introduced you to the Aluminum Gasket iPhone 4 Cases from id America. While the brushed aluminum offers stunning looks, it also provides strong and lightweight protection for your Apple iPhone 4. Their newest product is simply a new color for […]